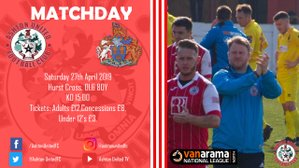 The Robins face The Robins on Saturday, Written by Shaun Cole

Ashton United host Altrincham FC at Hurst Cross on Saturday afternoon, in what is their final game of the season & also their last game in the Vanarama National League North.

LAST TIME OUT
Ashton’s previous league game was a 2-1 away defeat at Boston United in the Vanarama National League North. The Lincolnshire club and the Robins scored all their goals in the first half, with the Pilgrims taking the lead in the second minute. Ashton equalised in the 31st minute when Jamie Reed slotted past the keeper but only held on for 3 minutes after a free-kick for the home side found its way to Cresswell who made no mistake at finishing the ball.

For Altrincham, their last game came against Hereford were both teams shared the spoils in a 1-1 draw at home. Jordan Hulme opened the scoring for Alty in the 54th minute but Hereford managed to level the score 10 minutes later through a Tom Owen-Evans rebound and held on to the result.

RECENT FORM
Ashton head into the game with nothing to play for due to the result on Easter Monday which confirmed that the Robins would not play Vanarama National League North football next season. Over their last 5 games, Ashton obtained 4 points with an emphatic 3-0 win against Spennymoor Town and more recently a 1-1 draw against Guiseley. Their last 2 games were both losses to top half opposition which sadly ensured their fate for next season.

Altrincham travel to Hurst Cross unbeaten away from home since late January, a run which included a 6-0 thrashing of Curzon and a dominant 7-0 performance against Alfreton Town. In their last 5 games, Alty has gained 8 points with 2 wins, 2 draws and a 2-1 loss at home to Brackley Town. With Altrincham already achieving Play-off football, they may potentially field a weakened team this Saturday but are still one of the strongest teams in the league, especially away from home.

ONE TO WATCH
One player for Ashton fans to keep tabs on during the game this Saturday is the familiar Matthew Chadwick. Having only made 5 appearances for Altrincham so far, he’s still been effective during games registering one assist. On top of that, Chadwick scored 7 goals in 21 games for Ashton this season before leaving for Altrincham. Chadwick was a crucial part to the Ashton side that won promotion last season and continued to be up until his departure in February/March. Could Chadwick prove to be a thorn in Ashton’s side during the tie?

LAST TIME THE SIDES MET
The last time the sides met, Altrincham turned out to be the better of the two teams promoted from the Evostik league last season. Alty proved too strong for Ashton as they walked away with 3 points after putting as many goals past Goalkeeper Luke Pilling at the J Davidson Stadium. John Johnstone scored a brace of goals with Owen Dale (Former Loanee) adding a late goal to ensure the victory for Altrincham.

HOW CAN WE FOLLOW THE ACTION?
Match updates will be available through the usual social media channels; Facebook, Twitter and Instagram. Also, live Commentary of the game will be available.
Alternatively, you can make the visit to Hurst Cross with match prices as follows;
Adults - £12
Concessions - £8
Under 12s - £3
If you wish to gain entry at the concessionary rate please be prepared to supply the appropriate proof of ID.