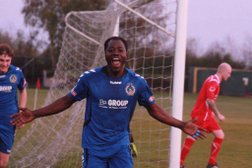 Prolific forward is our latest signing.

I’m really excited to be in a great club like Ashton United.
Yaw Gyimah

We are delighted to announce that the club has signed striker Yaw Gyimah for the upcoming 2017/18 season.

The striker will join the squad with the intention of chipping in with goals to help fire the Robins to promotion this season.

Gyimah, who has previously represented rivals Curzon Ashton, has natural finishing instincts in front of goal and can’t wait to get his name on the scoresheet for the first time in Ashton colours.

“I’m really excited to be in a great club like Ashton United. It’s a dream come true for me and I’m going to give 100% support to my team mates so we can move the club forward,” commented the forward.

The ex-Northwich Victoria forward will add firepower up front for the Robins and will keep the opposition clubs wary of the danger that he poses inside the 18-yard box.

The energetic forward has a habit of creating a chance from nothing. He has the ability to turn a game around within moments and is hoping to fire the Robins to a high finish in the league.

“I am going to go all out to help the club go up. I can’t do that alone, but with the help of my team mates hopefully we can go up,” he concluded.