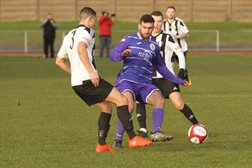 We're delighted to have secured the services of Jack Dyche for an initial 6 month loan period.
Jody Banim

Ashton United are delighted to announce the return of the prolific striker Jack Dyche on an initial six month loan deal from Scunthorpe United.

Dyche was at The Robins over two periods last year and it was a big loss when he eventually went back to Scunthorpe after impressing during his loan spells.

With a long term injury to Ryan Crowther the manager Jody Banim made no secret that he was in the market for an attacking player to fill the void in Crowthers absence.
Robins fans will be hoping that Dyche will be bagging the goals for fun again this year as we charge for a high finish.
Jody has been a busy man recently as he has also just announced the birth of his son, so getting the deal for Jack Dyche wrapped up will surely take some pressure off.

Upon the news of today's signing Jody Banim said "We're delighted to have secured the services of Jack Dyche for an initial 6 month loan period. Jack did extremely well on loan last year, and we're extremely lucky to have done a deal to get him back. It was vital we brought someone in after the extent of Ryan's injury was established and we feel that although Jack and Ryan are different types of forwards, Jack will give us real energy and genuine goal threat in the final 3rd."

Upon completing his move Jack Dyche stated "I'm buzzing to be back and getting some game time. Hopefully I can score the goals and help Ashton out this season."

With Jacks deal completed the squad seems to be near completion as we edge closer to our opening league game of the season which is an away trip to Hednesford Town on Saturday 12th August. Details about coach travel can be found here, http://bit.ly/2voi9iZ