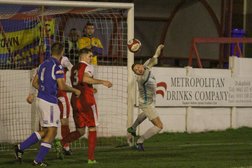 Jody Banim was pleased with his players after Ashton recorded their first home win since early September which saw the Robins comfortably dispatch high flying Warrington Town and complete the double in the Ikea Derby.
“I thought we competed well against an awkward team to play against, they’re very organised and play a certain way, which can be difficult to defend against. I thought we could play a lot better than we did, we were a little sloppy in possession at times, but overall I think we’ve done enough to win the game without being spectacular.”
And Banim was particularly pleased with Ashton’s defensive work as he hailed the return of goalkeeper David Carnell who has helped bring reassurance to the defence.
“That was the best part of our performance last night, we’ve had lots of chats about defending balls into our box recently, as I think it’s been a real weakness this season. The way Warrington play, you need to defend balls into your box well to get anything and we did that very well last night. I must say, Dave Carnell’s return from injury has helped massively in that aspect.”
Ashton claimed their second consecutive win and moved up to sixth in the table, the Robins travel to Stafford Rangers on Saturday and Jody Banim added
“We have good momentum again which breeds confidence, so we’ll go there with a desire to win. We have good options with the new signings and injured players returning, so we’ll go there full of confidence.”
Share via
FacebookTwitter
https://www.pitchero.com/clubs
Recent news