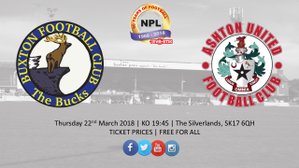 The Robins travel to Buxton, Written by Daniel Evans

BUXTON FC vs ASHTON UNITED
DATE: Thursday 22nd MARCH 2018
KO: 19:45pm
VENUE: The Silverlands, Buxton, Derbyshire, SK17 6QH
Ashton travel to Buxton on Tuesday in what will be another key fixture in Ashton’s battle for promotion. Buxton come into this fixture 16th in the table having had a difficult few games, winning only two in their last ten. Buxton’s last win came in their last outing, a 2-1 away victory at Halesowen Town with Joe Maguire and Ant Wilson on the scoresheet for Buxton. Ashton come into this game on the back of a 3-2 away win to Stourbridge thanks to a last minute header from Josh Granite. On the road the Robins have done well this season only suffering three league defeats on the road in 17 games.
Ahead of the fixture manager Jody Banim had the following to say “it’s got that bit of added spice with my old teammates and managers at the club and I’m under no illusion how difficult the game will be but we’re more than capable of going there and getting a result”
ONE TO WATCH:
LIAM HARDY;
The 27 year old forward came to clubs attention at Armthorpe Welfare, where he bagged 46 goals in one season from this he secured a move to Harrogate Town where he unfortunately suffered a leg-break early. Hardy first joined the Bucks on loan towards the end of the 2013/14 and had a tremendous start to his Buxton career scoring 7 times in 9 starts. He then signed for Buxton permanently and in his first full season was nominated for the league team of the year and scored 26 goals over the course of the season. In February 2016, Darlington came calling, but it wasn’t long before he was back at The Silverlands and in March 2016 he was back. So far in his Buxton career he is averaging better than a goal every other game and currently is the Evo-Stik Northern Premier League’s leading scorer with 26 goals so far.

PREVIOUSLY AT THE SILVERLANDS
It was the game that wasn’t the last time Ashton visited the Silverlands earlier on this year. All seemed to be going to plan as the game went ahead despite poor weather in the days leading up to the game, with Richard Smith opening the scoring early on for the Robins. But, after only 18 minutes the game was abandoned due to safety concerns over the floodlights.

Match updates will be available through the usual social media channels; Facebook, Twitter and Instagram. Alternatively you can make the visit to the Silverlands with match prices as follows;
FREE FOR ALL SUPPORTERS!!!