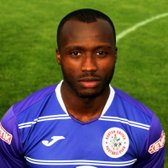 We are delighted to announce that the club has re-signed first team defender Cavell Coo for the upcoming 2017/18 Evo-Stik League Northern Premier - Premier Division season!

On his second spell at the club, the fullback has been very impressive and been on the receiving end of a lot of praise from fans. His consistency and high-quality performances were rewarded as he won the Robins’ Directors Player of the Year in 2016.

He’s comfortable in right-back or left-back and adds pace to the side when getting forward. Coo has previously played for various clubs, including rivals Curzon Ashton, Salford City and FC United of Manchester. However, it is safe to say that he is well and truly a Robin now! We hope to see more of the same next season!