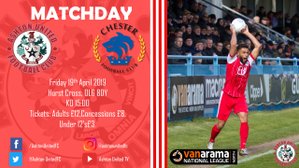 The Robins face a difficult challenge at home to Chester FC, Written by Casey Evans.

ASHTON UNITED VS CHESTER FC
DATE: FRIDAY 19th APRIL 2019
KO: 15:00
VENUE: Hurst Cross, Surrey Street, Ashton-under-Lyne, OL6 8DY.
Ashton faced one of their most important hurdles in their race for survival last time out, in a match against fellow relegation contenders Guiseley. The match ended in 1-1 draw, with goals from James and Sheridan resulting in each side leaving with a point. This was not the desired result for the Robins as they remain 4 points off 19th place, however there were a lot of positives on display in the team’s performance and they will be hoping to take this into the next game against 10th placed Chester FC.
Chester FC drew as well last time out, at home to 12th placed York City. They benefited from a Sam Newton own goal early in the second half, before suffering 2 goals from the visitors at the hands of Moke and McLaughin. Waring was able to salvage a point for The Blues in the 79th minute. Chester will be hoping for a better result on their trip to Hurst Cross, so Ashton will have to be at their best to get a result on Good Friday.
ONE TO WATCH
The player Ashton United fans should keep an eye on is Manchester born forward Anthony Dudley. The 22-year-old has been in excellent form for Chester, scoring 11 goals this term while he is on loan from parent club Salford City.
Dudley started his career at Bury in League 2, however he only made 9 first team appearances for the club scoring no goals. He seems to have found his form in the lower leagues, playing for Guiseley on loan in he 2015-16 season, scoring 7 in 16 appearances in the league. A spell at Macclesfield on loan followed, where he scored 4 in 12 before he moved permanently in 2017 to Salford City.
Currently enjoying the best form of his career and having many years in front of him, Ashton will have to concentrate and mark him well to stop this young striker adding to his tally.
OTHER FIXTURES IN FOCUS
Other matches that Ashton United fans may want to keep their eye on:
- The Robin’s previous opponents and the team that currently lies in 19th, Guiseley are away to 8th placed Blyth Spartans, who will be hoping a win will move them into the playoff positions
- Local rivals Curzon Ashton are at home to 13th placed Southport. With them currently lying on the same points, a win will be on both team’s minds
- And on Saturday, fellow relegation candidates, 21st placed FC United of Manchester are away to 14th placed Alfreton Town. A win is necessary for the Reds in order to keep their National League North dream alive.
HOW CAN I FOLLOW THE ACTION?
Match updates will be available through the usual social media channels; Facebook, Twitter and Instagram.
Alternatively, you can make the visit to Hurst Cross with match prices as follows;
Adults - £12
Concessions - £8
Under 12s - £3
If you wish to gain entry at the concessionary rate, please be prepared to supply the appropriate proof of ID.
Share via
FacebookTwitter
https://www.pitchero.com/clubs
Recent news