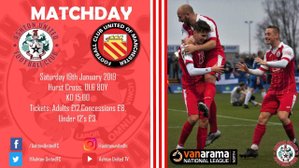 ROBINS LOOK TO RATTLE RED REBELS IN AN ALL MANCHESTER AFFAIR, Written by Tom Langford

Ashton United are back at home this Saturday as they take on FC United of Manchester in an all Manchester affair in the Vanarama National League North.

LAST TIME OUT
Ashton’s game last weekend was postponed due to AFC Telford FA Trophy game between Hartlepool United. However Ashton’s last league game was a 3 -1 lost to Brackley Town. Against Brackley, Ashton conceded two first-half goals from Jeffers and Dean the first coming in the 21st minute and the second coming in the 43 minute. Brackley extended their lead in the second half with Lowe adding a third goal in the 57th minute. Ashton, however, did grab a late consolation goal thanks to Jones in the 92 minute.

On the other hand, FC United of Manchester gained a vital three points away at Bradford Park Avenue with the Reds winning 3-2 in Yorkshire.

RECENT FORM
Ashton United come into the game in frightful form with the Robins having only picked up 1 win in the last 9 games. The last time Ashton picked up three points was on Boxing Day when the Robins beat local rivals Curzon Ashton 4-2. Ashton have also failed to win a home match since November.

FC United, on the other hand, are on a similar poor run of form with the reds having only picked up 1 win in their last 5 games. However FC United in their last game did pick up a 3-2 win over promotion chasing Bradford.

FC UNITED OF MANCHESTER SEASON SO FAR
FC United have played 26 games so far and sit a place above the Robins in 20th place. FC United of Manchester currently have 24 points and are one point from safety.

ONE TO WATCH
Kurt Willoughby is a player for both Ashton fans and players to keep a watchful eye on when FC United travel to Hurst Cross.

Willoughby Joined FC United in May 2018 from Clitheroe where the prolific frontman scored 26 goals in the Evo Stik North and earned a place in the team of the year.

Willoughby has scored 10 goals this season and could be the difference between FC United's survival.

LAST TIME THE SIDES MET
The last time Ashton United and FC United played was back in August where the Robins came away with all three points winning 4-3 in a 7 goal thriller.

VENUE: Hurst Cross Stadium, Surrey Street, Ashton-under-Lyne, Greater Manchester, OL6 8DY
HOW CAN WE FOLLOW THE ACTION?
Match updates will be available through the usual social media channels; Facebook, Twitter and Instagram
Alternatively, you can make the visit to Hurst Cross with match prices as follows;
Adults - £12
Concessions - £8
Under 12s - £3
If you wish to gain entry at the concessionary rate please be prepared to supply the appropriate proof of ID.