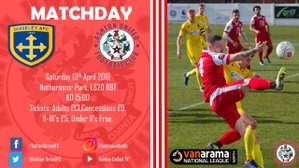 Ashton United are back on the road this Saturday afternoon as they take on Guiseley in a season-defining game in the battle for survival in the Vanarama National League North.

LAST TIME OUT
The last time the Robins played was last Saturday when Ashton thumped promotion chasing Spennymoor Town 3-0. The Robins scored all three goals in a four-minute spell with goals from Sam Sheridan, Kallum Mantack and Craig Hobson.

On the other hand, Guiseley lost 2-0 away from home to Brackley. The Lions fell to defeat with a goal in either half. Brackley scored just before the half time interval and four minutes after the restart.

RECENT FORM
Before the empathic 3-0 victory over Spennymoor, the Robins hadn’t tasted victory since 23rd of February. The Robins had only scored twice in that period. However, it feels like the Robins have turned a corner going into a must-win game.

On the other hand, Guiseley come into the game in shocking form with the Lions picking up 4 points in their last 6 league games. Similarly to Ashton Guiseley have found goals hard to come by with the Yorkshire based side only scoring 4 goals in their last 7 League games.

GUISELEY’S SEASON SO FAR
Guiseley currently sit 19th place after 38 games and have accumulated 37 points. Guiseley currently sit just outside the relegation zone only four points ahead of the Robins. Guiseley will be hoping to avoid back to back relegations as the Lions finished bottom of the National League last season. Guiseley also had an impressive FA cup run this season with the Yorkshire based side reaching the second round of the prestigious trophy. The Lions were knocked out to League One Fleetwood in the second round.

ONE TO WATCH
One player for travelling Ashton fans to keep an eye on his long-haired midfield maestro Kingsley James.

James who boasts passing and composure as his key traits has been ever present in the Lions midfield this season.

James started his career at Sheffield United however failed to make a first-team appearance before moving onto Port Vale.

LAST TIME THE SIDES MET
The last time the Robins played Guiseley was back in November when the Lions travelled to Hurst Cross. Ashton beat Guiseley 1-0 thanks to last month’s player of the Month Matthew Regan. Regan scored the only goal in a tight game.

There will also be full Match Commentary: http://mixlr.com/ashtonunitedfc/