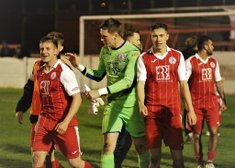 The Robins host Grantham in the final, Written by Robbie Coppack

Ashton United v Grantham Town | Play-Off Final
Following the ecstasy of Tuesday night’s win over Farsley Celtic, the Robins must regain their focus ahead of one of the biggest game’s in the club’s history. Second half goals from Liam Tomsett, who is slowly making a name for himself around these parts, there might be a sculpture being built to compete with Cristiano Ronaldo’s in madeira Airport. Aaron Chalmers doubled Ashton’s lead with 20 minutes to play with Farsley immediate halving the deficit. However, the Robins defence remained resolute to earn a Play-Final against Grantham Town this weekend.
The Gingerbreads comfortably beat Warrington Town 3-0 to set up a tie with the Robins at Hurst Cross.
Jody Banim’s men are unbeaten against Grantham this season, picking up four points against the club from Lincolnshire. The Robins picked up all three points in a 2-1 win back in August then coming away with a 1-1 draw at South Kesteven Sports Stadium just before Christmas.
The Robins will have to wary of Grantham leading goal scorer Lee Shaw, the striker has played a pivotal role in Grantham’s race for promotion and has bagged 29 goals this season and he will be keen to add to his already impressive tally on Saturday afternoon. Shaw has scored in both games against Robins this season, so Ashton will have to watch the man who had a clean sweep of the club’s Player Of the Year Awards last season, there must be a strong possibility he can achieve the same this time around.
604 fans came through the gates on Tuesday night, therefore we should expect a larger crowd on Saturday with just 90 minutes separating the sides from promotion to the Vanarama National League North. Therefore we are advising supporters to arrive in good time.
Ticket Prices:
£10 Adults
£6 Concessions