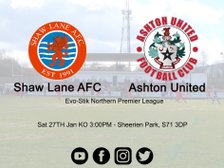 The Robins travel to Shaw Lane, Written by Robbie Coppack

Following the big win in midweek against Stourbridge, the Robins are again in action this weekend with another tough game this time at fellow promotion rivals, Shaw Lane.

The home side have only lost one of their last eleven games and boast an impressive home record with only losing the once at Sheerien Park. Shaw Lane have won their last two games, getting a narrow home win against Halesowen 3-2 before picking up all three points in midweek at Marine as the Ducks ran out 2-1 winners.

However the Robins can also go into the game full of confidence after another battling performance at to Stourbridge as Ashton picked up all three points with a 1-0 win at Hurst Cross courtesy of Aaron Chalmers first half penalty.

Gaffer Jody Banim was delighted with Ashton’s performance as they proved there is more than one way to win a football match.

“We defended a little bit too deep at times which invited balls into the box but the way we defended them, it was like real men. We put bodies on the line, clearing balls with our heads and feet and we got blocks in the way and we looked a threat on the break. I just said to the lads that there is more than one way to win a football match and we are proving that tonight.”

Bamin also praised the grit and determination despite not performing to their best in the second half as Ashton broke into the play-off places.

“We could have played a little bit better in the second half, but we showed grit and determination and that’s what it’s going to take to potentially get into the play-offs and who knows and take us a little bit further.”

“We’re on a really good run at this moment in time, we don’t know when we’re beaten and nobody in the league will want to face us with the form we’re in.”

The two sides last met in October and the game ended in a six goal thriller with the Robins scoring a dramatic last minute penalty to salvage a point at Hurst Cross.

The Robins took the lead courtesy of Alex Johnson on 16 minutes before Liam Tomsett doubled Ashton’s advantage. However Shaw Lane quickly halved the deficit a minute later thanks to Paul Clayton. 15 minutes later and Shaw Lane equalised after Simon Woodford diverted Walkers cross into his own net. Shaw Lane then went ahead just before half time after Spencer Harris converted from the spot.

However in the dying minutes of the game, Ashton were awarded a penalty of their own and Matty Chadwick made no mistake to snatch a point for the Robins.

Central midfielder David Norris is our one to watch. The former Plymouth, Ipswich, Portsmouth and Leeds United man has a wealth of experience within the Football League accumulating over 400 appearances before joining non-league Leatherhead in 2016. He has then gone on to a short stint at Salford City before joining Shaw Lane this summer.