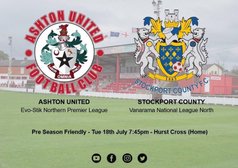 Ashton United will host National League North side Stockport County for their third pre-season friendly of the season but their first at home as the Robins look to get in shape for the upcoming season.

The Robins have enjoyed getting themselves back to match fitness as the beginning of the new season edges closer.

Ashton United battled to earn a draw in their previous game against Radcliffe Borough but the game was scarred by a serious looking injury to midfielder Ryan Crowther. The extent of the injury is still being assessed.

The squad had to work hard to earn the draw and was valuable in gaining match fitness as manager Jody Banim isn’t too concerned about results at this stage.

The Robins will face a tough challenge against Stockport and will have to be sharp and concentrated to get a result, which is exactly what Banim wants from his players.

Robins’ fans will be delighted to see their players back at Hurst Cross for the first time since last season as the excitement for the new season builds.

The league fixtures were released yesterday and the Robins’ first game of the season will be away to Hednesford Town on 12th August.