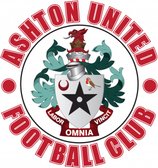 Ashton’s long unbeaten run came to an end as the league leaders ran out deserved winners at the J Davidson stadium. With Matty Chadwick restored to the attack the visitors gave a debut to Daniel Mooney alongside him and also restored Cavell Coo in defence.
It was the Robins of Altrincham off to a flyer as ex-Ashton player Max Harrop was afforded far too much room and strode forward before firing home a swerving effort on 2 minutes. With ten minutes gone Harrop guided Hancock’s pull back comfortably wide before Hancock stepped inside and fired straight at Carnell. Just 4 minutes later James Poole headed home Hampson’s cross after Hancock had again been sent clear down the left wing. Poole then tried an audacious attempt from the centre circle and Jake Moult hammered a loose ball just too high as the home side continued to dominate.
Matty Chadwick finally got a chance to run at the defence drawing a booking from Hampson with the free kick hitting the wall and Poole’s clever pass then gave Hulme a clear run on Carnell who saved with his foot. With the interval approaching a free kick rebounded to Tom Peers who turned it home with Ashton saved by the offside flag and Chadwick brought a stinging save out of Thompson with Ashton’s best effort.

Normal service resumed after the break as Hampson twisted his way into the box and fired just over after which John Pritchard strode forward with Nic Evangelinos forcing a sharp save from Thompson. Alty could have moved further ahead as Hancock’s mishit effort just evaded Poole at the far post and Hulme miscued his attempt from Densmore’s overlapping cross.
Peers then sent in a bouncing effort which gave Carnell a tricky save and Hancock cut inside but sliced his shot across goal. With 20 minutes left Hulme worked his way along the by line and fired home the third goal from a narrow angle. There was still time for Ashton to give the score line a slightly flattering look as Hampson brought down Evangelinos with Aaron Chalmers sliding home the penalty and right on full time Pritchard put a fine free kick against the bar with Mark Lees’ follow up being blocked on the line amidst shouts for a penalty. Pritchard had got his eye in by now and went one better curling home another dead ball from the opposite side of the area with almost the final kick.