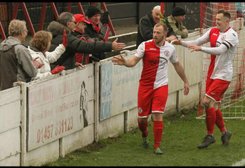 Chadwick commits for next season.

We are delighted to announce that Matthew Chadwick has chosen to stay at Hurst Cross for the coming season.
We are sure that this was the news that The Robins have been waiting for as Chadwick was simply on fire last season.
Chadwick, who is a natural winger but can play in the 'number ten' position, grabbed an impressive 23 goals in all competitions in a season that saw him finish top scorer for the club.

Jody Banim made no secret in his recent interview that keeping Chadwick was crucial to his plans for next season.
Chadwicks pace and link up play with Ryan Crowther was integral to the club finishing mid table and not getting dragged into a relegation dogfight.
Chadwick was certainly a hit amongst the fans as he was named fans player of the season and also presented with the prestigious 'rear of the year award'

With the retained players and the new players that are soon to be announced we can see that Jody is sticking to what he said in his interview by creating a fast free flowing team that can be in the hunt for the play-offs.
With Chadwicks announcement that rounds off the retained players list and we hope that you enjoyed the set up and the suspense.
Tomorrow we start to announce the new arrivals.
Watch this space!