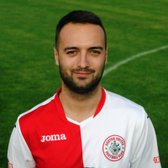 Crowther commits for the coming season

The club are delighted to confirm that last seasons player's player of the season, Ryan Crowther, has been retained to play for the Robins in the upcoming 2017/18 season.

The 28-year-old is in his second spell with the club after making 22 appearances and scoring 3 times in 2011. He rejoined in 2016 from Altrincham and has been in scintillating form for Jody Banims side.

Born in Stockport, Crowther began his career at Stockport County before moving to Liverpool in 2007 and featured for their reserve team during the 2007/08 season. He has also had spells at Stalybridge Celtic, Hyde, Fleetwood Town and Halifax Town.