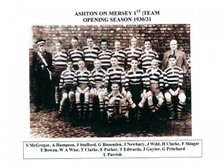 Ashton on Mersey Rugby Club was formed in 1930 by disgruntled members of other local sides, namely Sale, Bowdon, Kersal and Metrovicks, who weren’t getting games elsewhere.

Meetings were held in ‘Bostocks’ sweet shop situated in Ashton Village opposite St. Martins School. By the start of 1930/31 the first fixture list had been prepared and the use of a field acquired on Whiteleggs farm on Harboro Road. Teams changed in the barn at Litherlands farm on Carrington Lane and bathed in tin baths using water heated by an outside boiler.

As the club expanded Browns the builders let the club use their land on Kenilworth Road in 1933. The old coach house to the rear of the Buck Inn became the changing rooms. T. Bowen who played in the inaugural season was a son of the landlord at the time.

The premises were shared with the Ashton Silver Prize Band who used to parade and practise on the rugby ground as a prelude to matches. After three years at Kenilworth Road the land was required for building and from 1936 the club used grounds off Glebelands Road, near St Martins Church, now known as Romford Road estate. One constant embarrassment was the public footpath running across the second team pitch, when unsuspecting members of the public would stroll across the pitch. The club was now running four teams playing the likes of Winnington Park and Macclesfield. One of the more prominent members of the playing staff, F. Derrick, went on to play for England in the first Calcutta Cup match then played in India.

It was decided in 1939, due to the imminent outbreak of war and absence of members who were with HM forces, to suspend operations. It was six and half years later in 1946 before Ashton reformed. With no clubhouse or ground and with very little money, times were very difficult. Ground sufficient for one pitch was eventually rented from Sale Corporation which is now the site of the existing grounds, then known as Barracks Lane. An ex RAF hut from Stafford was acquired. This wooden and corrugated iron structure served as bathhouse and changing rooms for many years. No mains services existed. Water was hand pumped from a nearby well and heated in a coke fired boiler. When the old baths were replaced by brick baths and storm lamps replaced by electricity from an unreliable generator, it was perceived to be an achievement of great importance. During the erection of the corrugated building one club member on the roof was caught short and relieved himself, subsequently filling another member’s shopping bag draped across the handlebars of his Mum’s bike!

The club badge was first designed and adopted in 1954. The club colours, maroon and white, were overlaid by the unicorn, the family crest of the Trafford family, and three wheat sheaves, representing Cheshire.

A second pitch was leased from Sale Corporation. A wooden ex-army building was purchased and rebuilt giving Ashton its first clubhouse in its history. By then ground for a third pitch was made available by dynamiting a very large tree stump out of the ground. The work was carried out by a friend of a club member. The explosion did not impress the local fire brigades who thought an accident had occurred at the nearby chemical works. Meetings were held at the Brooklands Hotel and the Little ‘B’ – a tradition that lasted for many years.

Mains water, electricity and a licence were first brought to the club in 1956. 1961 brought back four sides again and a very successful colts side including Roy Maddock who went on to play for Sale 1st XV and was capped several times for Cheshire. The success of the colts team was largely due to the drive and determination of Peter Whiting. A new personality arrived at the club in the form of Andy Gormally in 1959 who was instrumental in taking the lead in social ventures including marquee balls attracting in excess of 2000 people.

In the early 1960s the club received some very unwelcome publicity when one of its members, being the son of a Knight of the realm was involved in divorce proceedings. One of those involved alleged that infidelity and wife swapping was rife at the club, resulting in half a page in the Daily Express’s gossip column, referring to Ashton as the ‘Old Canoodlians’.

A new clubhouse was eventually built in October 1967 at a time when Ashton were fielding seven teams every week. This was built on the current site of the existing clubhouse, which was doubled in size by building over and around on all four sides of the old clubhouse in 2002/2003 – giving us what we have today.

Ashton were the first club to start junior rugby in 1972. When leagues were first established in 1988 Ashton won their respective division four years on the trot. Various restructuring of the leagues left Ashton where they were even after being champions on those four consecutive occasions. We eventually got promoted to North West One in 1994, the highest position in the club’s history.

A major landfill exercise started in July 2000 and was completed in August 2001 culminating in the raised pitches becoming some of the best in the area. The early noughties saw the senior teams struggle with the 1st XV relegated and at times the club scraping to put a 2nd XV out. Conversely the junior/colts section thrived at this time. The latter half of the decade saw a rebuilding of the senior squads with three teams playing every week - resulting in a stable 3rd XV, two promotions for the 2nd XV and the 1st XV winning the Cheshire Plate in 2009 and promotion in season 2009/10 to South Lancs/Cheshire 1, where they currently reside.