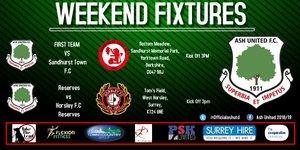 Weather permitting, our 1st team tomorrow (Saturday 16th March) take on Sandhurst Town at Bottom Meadow, with a 3pm kick-off. The reserve team travel to Horsley FC to play their reserves at Tom's Field, Horsley on pitch number 2 (at the back of Horsley's club house).

The Under 18's match against Fleet Town U18's on Tuesday 12th March was postponed due to a waterlogged pitch. This match has now been scheduled for Tuesday 9th April 2019 at the Shawfield Stadium, Ash with a 7:30pm kick-off.

We are counting down the number of games left to play in this season. After tomorrow's game against Sandhurst Town, the 1st team have 5 more league games left. Four of these games will be very significant to our opponents; Cove, who are in danger of being relegated as per the change to relegation at Step 6 advised by The FA only a few weeks ago (2 to be relegated this season from Division One); Bedfont & Feltham, who are challenging Frimley Green and Sheerwater for the only promotion place up for grabs; and Sheerwater, for the same reason. So as far as our final 1st team games go, there is everything to play for and this makes for very interesting...and perhaps, from our opponents point of view..a little nervy..flourish to the end of season.

Meanwhile our Reserves take on Sutton Common Rovers Reserves next weekend in the Reserve Challenge Cup Semi-Final, being played at Merrow FC, with a 2:30pm kick-off. The Reserves have 5 league games left to play, plus games in the Reserve Spring League, which should take them through to the end of April.

The Under 18's have 4 games left. Home to Fleet Spurs on Tuesday 19 March; home to Alton on Tuesday 26 March; Away to Guildford City on Wednesday 3 April; and finally, home to Fleet Town on 9 April.