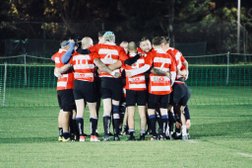 A tremendous afternoon of rugby for the 13 Askeans players that showed up for our first pre-season game against Charlton Park 3 XV.

New captain Jack Henderson and pack leader Ciaran O'Flynn took up on themselves to make sure the game went ahead the past saturday.
Askeans only had 13 players so Charlton Park loaned us 2 players for the full game.
The game started fairly even with Askeans going down hill in the first half after 5 minutes of Askeans breaking lines after lines the first try of the game arrived, it turned out to be the first of many!!!

Askeans finish the game with score at 60-20 a great achievement by all the lads that showed up.