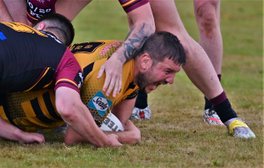 ASPATRIA GRIND OUT THE WIN

Callum Thorndike reports on a tense win for the Hornets

Aspatria Hornets dug deep to overcome an experienced Seaton A side with the boot of Matty Irving the difference between the sides. Aspatria were deprived of the services of Gareth Nicholson who was injured in the opening exchange of last week's game against Hensingham 2s, Guy Reed (work) and Ken Bowes (injury). However, Coach Okesene was able to welcome back balk-rower Joe Gilroy and winger Lee Allen.

Aspatria got the first points early on through Luke Johnson, who evaded a couple of tackles on his way to the line. Matty Irving added the extras.

Brandon Walker then crossed for the visitors and was able to convert his own try, levelling the scores, which would remain level into the break. Aspatria created some half-chances but a mixture of Seaton scrambling defence and Hornets' errors meant that these were not converted into points.

After the break, Matty Haywood scored for Seaton capitalising on an awkward bounce of the ball, giving the lead to his side for the first time. No conversion was added.

They then extended their lead as Ryan Herron scored after some excellent support play from a break, but again no conversion was added.

Ross Barton then brought the scores closer together again after a break down the right hand side. Matty Irving then converted to close the gap to two points.

James Robinson was then put in the sin bin and Aspatria capitalised on the man advantage when Stuart Creighton powered over and Matty Irving goaled again, opening up a four point lead.

Alex Barton then crossed completing a nervy win for the Hornets, and Matty Irving added the extras to make it a two score lead with little under two minutes to go.

Seaton still had time to score a consolation try late on through Stephen Harris but the conversion attempt from James Robinson missed the target, leaving the final score 24-18 in Hornets' favour.

A tense ,and often nerve-wracking win, but a win nevertheless.

Thank you to all those who supported the lads today.

Meet at changing rooms. Please give yourself plenty time, especially if you need strapped up. Club attire to be worn before and after game.