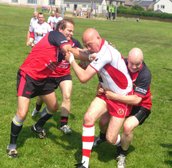 Life In The Old Dogs Yet

Aspatria Masters travelled to a sun drenched Arlecdon to play their first game against West Cumbria Masters on Sunday. Interest had been high ahead of this clash and a large contingent of Hornets fans made the trip to see how the ‘seniors’ would fare and adapt to the rules of Masters Rugby.

The hot weather had little effect on the enthusiasm and energy levels of both teams and it was surprising how quick the pace if the game was. Several of the fans commented on how they felt like they had travelled back in time on witnessing some Hornets greats rolling back the years. Aspatria were strong across the board but their strength lay in the forwards and it was second rower, Phil Cable who opened the scoring after an audacious overhead pass from Algie Reynolds.

West Cumbria were determined opponents and they were not afraid to throw the ball around and this tested Aspatria’s sliding defence. However, the Hornets were well marshalled in the centres by Mike Reed and Mally Barclay. Barrie Donald, Mike Nicholson, Nigel Ridley and Ash Barton were prominent in attack for the Hornets with Henry Crossman working hard in defence.

Stand-off Peter Thorndike was running the ball with purpose and Mark Ashworth was dangerous running from full-back, making several incisive breaks. Wingers, Maurice Brown and David Creighton were looking for work to help out the pack on a blisteringly hot day.

Aspatria scored their second when Ash Barton got over the whitewash but the West Cumbrians showed grit and determination and pulled a try back of their own. Surprisingly, both teams maintained a quick rhythm in the blistering heat and were playing some attractive rugby.

In the final period (the game was played over 3 twenty minute periods) both teams scored a try with Algie Reynolds getting the Aspatria score.

The final whistle sounded and both teams gathered in the middle of the field to exchange handshakes and reminisce about the good old days. The game was refereed very well and the Hornets will get better as they get to grips with the subtleties and nuances of the Masters game.

Their next outing will be at Aspatria RUFC on the 27th July when a Masters Festival will take place with Aspatria, West Cumbria, Blackpool and Leeds Masters taking part.