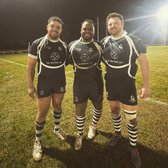 Ethan Channer, Julius Hunt & Dom Owen were all named in the squad for Greater Birmingham who beat Worcester & Herefordshire 39-12 in the first fixture of the Three Counties Championship at Kings Norton on 2nd February.

Ethan scored 1 try and Julius bagged 3 in a man of the match performance.

The remaining fixtures are :-