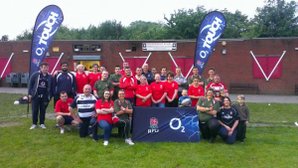 but local rivals Handworth had the final say on the scoreboard.

What a great turn out we had last Tuesday, for Aston’s first venture outside of the Sunnybank Avenue Touch arena.

Between the two clubs 48 players took to the field, a great mix of young and old, male and female, experienced and raw beginners ……
The games were fast paced and very competitive, but it was clear from early on that Aston have still much to learn about a discipline that requires skill, fast thinking and good handling – it would be an understatement to say that the amount of dropped balls and missed passes played a significant role in the final 4-2 win to the hosts.

Without being over critical, a number of players also need to learn that charging head first, route one, at individual defenders will gain you no benefit in touch. You cannot ‘bully’ your way past someone who only has to tig you to take you out of the game. That said Terry Finn, Kit Showandae, Marc Almond, Sean Sandford, Jakob Burnett and Mike Bromley all tried their very best to create space and time for the younger runners to get away.

Some great tries were scored on both sides and the underlying humour of the key players was a joy to behold. Great hospitality afterwards (thanks to Mr and Mrs Dawson) and a great start to both clubs first venture into taking their touch ventures outside of the inter-club set up.

Pictures from the event can be found on the ‘Handsworth O2 Touch’ Facebook page.