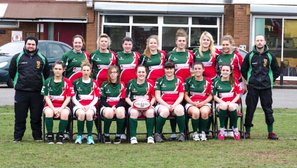 Probably the most anticipated game of the season had finally arrived.

The inaugural Aston Women’s Team fixture was upon us and whilst the weather didn’t arrive in good spirits, the many supporters certainly did.
After a couple of run outs combining with Sutton Ladies the Aston side was all its own, even with injuries to key players, a full 15 ready to start the game.

Kick off signalled the start of hostilities and the game began at a good pace. The weather played havoc with the handling for both sides and the early exchanges were peppered with scrums resulting from knock-ons on both sides.
The scrums went well for Aston right from the beginning and there was no sign that any of our players had only got 1 to 3 games under their belts.
The number of scrums managed to exceed the minutes played and whilst tackles went in hard and fast from both sides something looked certain to happen for one side or the other.

Sadly the first try went to Crewe and Nantwich as their clear experience advantage in certain positions started to show.
Conversions in this weather were going to be hard and the first one missed the uprights.

Aston had hit hard in the tackle from the beginning but after going down by a try their efforts were redoubled.
It was difficult to get a foothold when possession got to be harder to come by and the initial referee involvement continued to make the game a stop-start affair.
When possession did come however there were clear signs of strong rucking and some great offloads from the floor, and Leah at 9 gave Jenny at 10 some good quick ball to work with.
Aston didn’t have a one dimensional approach either with forwards and backs hitting the ball at pace. Sam and Kayleigh both took the ball forward and hit hard when possession changed hands.

C&N jackled well all game, often playing it close to having hands in the ruck they had clearly been drilled to get the ball up and off the floor and out to their very quick backs. It was a good plan and it undid the hard work of the Aston team.
Their defence was superb and some monster tackles were put in by every player on the pitch. Some of the C&N ladies knew how to hit up with ball and hand and some big tackles from the front 5, especially Jess, Michelle and Becki, gave some hope to the Aston side. The backs did more than their share of tackling too with Naomi and Jenny putting in some big tackles against some very fleet of foot wingers and centres.
The C&N players had the command of the jinking run and played like a back three of Jason Robinsons. An Aston side with more playing time together would certainly have limited the damage but the rumours of the C&N players having come over from Sevens seemed more than probable.

Half time came in no time at all and saw Aston 7 tries and 1 conversion down.
The running and tackling of the home side certainly didn’t deserve the score line and all but one of the conceded tries were breakaway in nature.

The second half was a much better one for Aston and they got through almost two thirds of it without conceding again.
The same players were continual thorns in the side of our women but they were repelled at every turn especially almost 20 minutes in when Naomi put in a try saving tackle right on the Aston 5 metre.
Sadly the C&N ladies couldn’t be repelled entirely and they strung through a few phases before dotting over on the far side.
This was symptomatic of the Aston team. In the first half the tries came after a slipped tackle and a breakaway. This one the C&N ladies had to really work and run through the phases to break the gain line.
It wasn’t just a sign of greater awareness and understanding of each other but a complete reluctance to give up in any way.

There were some great bursting runs from Jess and Jenny, with plenty of support from all across the team. Almost every player took a big hit from some of the C&N players, particularly their number 8 who seemed to continually move the game forward with pop passes and turnovers.

Aston marched down the field with steady build up and good phase play. In the last moments of the game this was really impressive and showed great grit and determination.
Right on the C&N line it became almost inevitable that an Aston score would come.
Sam, the captain, battled over to score in a mass of C&N defenders.

After only one conversion from C&N, Aston were determined to show their own worth.
After a great game at 9 Leah stepped up and placed, straight down the middle, a perfectly composed conversion.
It finished 60-7 but Sunnybank Avenue erupted like it had been a famous win for the home side.

The thing is it really had been.
Yes the score said something else but the faces of all the players and supporters said something completely different.
It’s been a decidedly short span of time since the idea was first conceived with any real intent (and a certain male grooming bet) and the Ladies have progressed beyond all measure.
With a team almost entirely comprised of complete novices, and almost all playing their first game it’s an incredible achievement that deserves massive credit and congratulation.
Through trials and tribulations of sharing a team, building the numbers through from the initial founding members (and mommies) up to a full side, and injuries and knocks along the way; it’s been great to see the big day finally arrive.
Every single woman on the pitch made that promise when crossing the white line to put in 100% for their team mates and each player delivered.
Blood was shed, beer was shared and the club house afterwards rang with the sounds of a proper rugby occasion. What happened in the changing room we’ll leave to the ladies to know and H to dream of for days to come.

If you missed out the next fixture is coming soon, just at the end of the month. Get down and support the most exciting thing to happen in Aston rugby since PBs debut. Yep, that long.