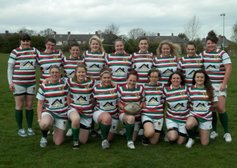 With the season drawing to a close the run in to the last few fixtures can feel like an anti-climax. Not so for the Aston Ladies team. Everyone at the club has shown their support for Aston’s newest team and I can’t be the only one to have enjoyed a steady run of fixtures for the best supported team we’ve got.
With taking on Handsworth at home two weeks ago it was time for Aston Ladies first official away day and the return fixture down on the Walsall Road.
To say conditions were unfavourable would be kind with a rock hard pitch bringing on astroturf style burns and scrapes and high winds causing havoc with kicks and lineouts. At least the subtropical monsoon arrived after the game had all wrapped up, but I’m sure some would have liked it half an hour before kick-off to soften the ground.
The first half was a scrappy affair with possession changing hands frequently and Aston weathered the storm of the uphill climb. Conceding a try just at the start and just at the death of the half was scant reward for 40 minutes of fight but there was plenty of points in that slope and Aston felt that Handsworth hadn’t made enough of their advantage.
An emotionally charged team talk echoed the feeling in the team and the second half saw Aston come out with all guns blazing.
Straight from the restart Aston took the kick and barrelled forward with Eva taking the ball into contact.
A number of great phases of play with forwards and backs taking the ball into contact and being supported well by players rucking over and securing ball gained Aston territory. The team showed great energy to build secure phase after phase with brilliant takes from Sam, Kayleigh and Rosie and brilliant rucking by Michelle and Becky. The backs sat poised and after a few phases of planned advance they were released brilliantly through the continually assured half back axis of Leah and Jenny. Putting Aston’s back line against Handsworth’s was a far more one sided battle that that upfront and Leah, Gabi and Eva had a field day with ball in hand. Often the Handsworth defence were left to the very last tackler to bring the Aston attack to a halt and a fierce run along the Aston right wing was narrowly the first try.
The ball came back inside for an Aston scrum on the 10 metre and it seemed that despite all the coaching and warning the Handsworth coaches had delivered in training they had not paid heed to the last fixture.
Captain Sam Clay picked up at the base of the scrum, an excellent set piece by Aston despite the size difference in the forwards, and barrelled a run through three tackles and dotted down near the uprights.
10-5. The Aston fight back was on the rails.
Without giving chance to draw breath there was another great run back from the Aston backline again straight from the restart. Handsworth didn’t seem inclined to chase their kick offs and Aston were more than happy to close the advantage. With more superb forward support and some excellent rucking out Aston moved the ball forward with some assured phases. The backs ever present threat kept Handsworth defenders out wide and without the assistance of the referee, turnovers didn’t look likely with Aston moving forward.
Again Aston pushed the advantage out wide left before releasing again through the backs and out to Eva at 15 who ran in almost unopposed and scored right under the posts.
Leah landed a text book conversion and the game was all of a sudden Aston’s to take.
10-12 to the away side and the ladies looked like they were just warming up.

Handsworth were not dead and buried at this stage but they didn’t make the most of all the possession. Their forwards worked hard with a long series of pick and goes and crabbed across the field from right wing to left but gained little in terms of actual territory due to the fierce fightback from the Aston defence.
A breakout by the away side led to some good scrums and a lineout in the Handsworth half and a massive break from Sam earned her a hefty smack on the head and a loose contact lens but the referee handed possession back to Handsworth.
A vociferous crowd supported both sides and even with Aston having the larger contingent the home support fell foul of the referee and earned their team a 10 meter backward step. The referee didn’t enforce the distance and then confused the breakdown and handed possession right back to Handsworth again.
This prompted another barrelling series of short phases from the Handsworth side but the slope and the complete denial of their backs led to more Aston turnovers and without doubt the moment of the game.
Aston turned the ball over and did exactly what Handsworth seemed so reluctant to do. Leah and Jenny fired off quick passes out to Gabi who burst through a tired looking tackle and ran over half the pitch entirely unopposed to score right between the posts.
Leah added the points from the boot and Aston went 10-19 up and more comfortable than ever.
They had shown that they could weather the storm that the Handsworth forwards were bringing and dish out far heavier damage of their own.
Again the restart was left up to Aston and Rosie put in the forward run of the game smashing through the Handsworth defence like it was smoke and mist. She took a knock on the way down but was up a back into the game in no time.
Desperate defence from Handsworth was rewarded with possession granted by the referee, sometimes rightly and sometimes not but of the two sides Aston looked more dangerous with ball in hand.
Jess looked assured in the lineout when Aston got the decision and she showed that all the practice on Thursday had worked well. Nicki took the ball brilliantly in the air and dotted it down to Leah who released Jess on a superb looping run that gained 20 metres. Support was there in abundance and Sam picked up from the ruck and added another 10 meters of territorial gain.
The training ground drills of Adam and Dave were lighting up the blustery Sunday afternoon and the Aston ladies were putting on one of the shows of the season. Each player knew their job and did it well, with everyone taking the ball and making something of it. Everyone knew to support a ruck or when to get out into the fringes to support with a passing option or to push out the defensive line when the ball was lost.
The composed performance continued at pace with Leah releasing Naomi for a trademark bursting run from centre, hitting the gap and being just brought down.

Aston kept Handsworth pinned in their own half for long periods here and the scrums that Handsworth had possession for were hurried and pressured. Twice the ball spilled straight out the side and without an alert scrum half they would have been in more trouble. In both cases the ball went through the hands of the Handsworth backs in an attempt to break out but in both cases their right winger was barrelled into touch. Once by Jess and once by Eva and I think both times they let her know what it meant to bring the ball forward into the Aston defence.
The lineout was called not straight by the referee much to Aston dismay and the scrum went to Handsworth. A powerful scrum saw their flanker break off with the ball and despite being four times her size Nicki brought her down with a massive tackle and Aston won the ball off the floor. A refereeing decision cost Aston possession again and this was compounded by having to drop 10 metres.
Handsworth met the Aston wall of defence once again in the shape of a big hit from Michelle and Becki picked up on the loose ball and smashed a forward run that gained 10 to 15 metres. The props had a composed game throughout and worked as a good pairing in the set piece, the loose and at every breakdown.
Leah capitalised on the opportunity with more quick ball and Aston passed through hands to take it across the pitch to the other wing and Gabi ran over again to score.
10-24 to Aston with a narrowly missed conversion in windy conditions and it seemed that it was game over.
The restart fell to pattern and Handsworth let Aston run the ball back with Michelle at centre hitting really hard into a tired and ragged defence. Leah saw the overlap and struck with her and Jenny releasing who else but Gabi and another try went Aston’s way.
A superb conversion that perfectly bisected the uprights saw Aston with a 31-10 win, the final whistle coming a split second after the conversion had been awarded.

A game of two halves could not have been clearer but for any side to score 31 points in one half is impressive, but to do it twice, against the same opposition is incredible.

Emotional scenes came after the final whistle with tears coming from a surprising source and laughs and happy smiles from everywhere else.
To complete such a victory at the very place this team was first put in motion is a superb milestone for an already brilliant team.
It went to highlight the great relationship between the two sides and the nature of the fledging local women’s game that has seen these two sides support each other’s progress.
The turnout was spectacular and a full club house and full touch line was a massive boost to the players and the game as a whole and shows what a future there is for this part of the game.

We all look forward to the next fixture with excitement and pride in equal measure.