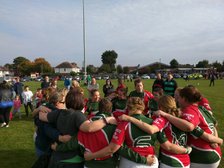 First Game and First Win of the Season

Astons women’s first fixture of the season came against Wolverhampton, who travelled in some numbers to Sunnybank avenue.
Due to a number of commitments, injuries and retirements, Aston had to be helped by Warley and Wolverhampton to get 14 players on to the field.
The start could have gone better with Aston as the extra numbers out wide told almost immediately. Wolverhampton took the ball and passed through the hands out to their winger who found no marker, and no problems, dotting down for 5 points in just 3 minutes.
The fight back was taken slightly too literally by captain Sam Clay. In tackling a Wolverhampton player out into touch she started a fight between her nose and a flag on the side line. Both came off broken, the flag worse than the nose, but the tackle saved another certain try out wide.
Wolverhampton were determined to let all of their players take a turn on the field, making full use of the rolling subs. They even took off the entire back line and replaced them en masse. A first for me and many other spectators too!
The high energy and tempo did both teams credit, and Wolverhampton took the game through the middle after finding the space out wide closed off by the Aston defence.
Whilst logical this led them right into the hands of Aston’s greatest strengths and some incredibly hard tackles and some fierce counter rucking. Sam had already staked her claim with a big tackle, but that list filled up quickly with crunching tackles from Naomi Dartnell, Jenny Parry and Leah Brown.
One of these crunching tackles and the ensuing ruck took its toll and three players were down. Naomi had taken a boot to the head whilst Sam dislocated her knee cap. The third player was from Wolverhampton and as both teams stopped to tend the wounded time was called on the first 20 minutes.
As the second began so did the Aston fight back. Boosted now by the loaned Wolverhampton players the ladies came out in full control of the game and scored from the off. Possession straight from kick off and quick hands saw Lydia, Warley’s captain playing in Aston colours, score in the corner.
Leah kept her formidable kicking rolling into the new season with her first conversion of the game and the season.
Now the game was well and truly on and some of the star players from last season. Roisin Mulligan, appearing in the second row, made some runs with ball in hand that took the game right to Wolves and gained some valuable yards. This pressure led to a knock on by Wolves and with quick ball and great hands, Aston scored again, through Lydia again, and only 4 minutes had gone in the second third of the game.
Leah grabbed the extras with another accomplished kick and Aston were 14-5 up and looking back on form.
Naomi, feeling somewhat better, returned to the field and gave the backline some more invention and linked well again with Caellagh Garrison. Caellagh got the ball in the tightest of spaces out wide a number of times but the Wolves defence was marshalled well out wide and gave her little reward for her hard work.
Diane Cummins in her debut at prop took the scrum well and was always on hand when the ball went to ground. She gelled well with her fellow prop Becki Clinch and both were on hand with great supporting runs and rucking when Aston possession came.
The key runners were Naomi and Rosie but Jenny Parry took the ball on in such a way the Wolves just couldn’t live with her. She broke tackle after tackle and pressed the Aston cause right up to the Wolves five metre line.
Initially the defence was strong but hands in the ruck gave Aston the break they needed. Jenny, with some work still to do, got just rewards with a well-earned try. Leah took a difficult kick well and again secured the two points for Aston. 21-5 to the good after being down within 3 minutes showed the great spirit within this team and is a great testament to the progress they’ve made.
This brought to an end the second 20 minute spell of the game and gave both sides a breather.

Like boxers hearing the bell for the first round, both teams went for each other with renewed enthusiasm and greater purpose . The rucks were fierce and despite the fact that Wolves were changing players on and off at regular intervals Aston were making the ground. Zoe and Rachel, the other Warley players plying their trade for Aston on the day were crucial here, adding their support in the set piece and fringe play. Greater support, better counter rucking and a simple desire was winning the day for the Aston girls. What they might have lacked in numbers they did not lack in coaching and it was evident with the hands in the backs and the decision making at the breakdown.
5 minutes in a quick break from Wolves brought the ball to the Aston try line and Wolves could smell the points on offer. Aston were camped on their own line for more than a few minutes and exhibited great defence but couldn’t keep up the fight indefinitely.
They conceded 5 minutes into the last third and with Wolves missing the conversion the score now stood at 21-10.
In taking the game back to Wolves, Jenny too succumbed to injury. A collapsed scrum led to a knee injury and she needed to be taken off for the final ten minutes.
In the ensuing reorganisation Wolves took advantage and scored another. No conversion either so Aston now looked at a 21-15 game, close and getting closer it seemed.
The impetus changed hands again and the Aston backline was allowed to fire with great hands from Vicki Hodson, Naomi Dartnell and Leah Brown bringing Aston some outlet for their hard won possession. With great reward for her ability to keep the move going with superb handling Leah grabbed the ball from her bootstraps and ran in to score out wide.
Despite not dotting over in between the posts to help herself out for the conversion, she made the more difficult kick look just as easy and added the points again.
28 – 15 and a right humdinger of a battle was being taken to the wire.
Whether through tiring, or finally succumbing to playing with fewer numbers, Aston conceded a try with almost the last play of the game.
Another conversion missed and it was all over. 28-20 and another victory for the Aston Women.