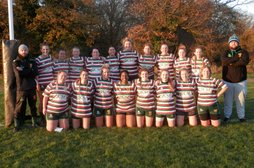 Aston did not know what to expect from today’s opposition who are reportedly top of their equivalent league, and certainly their warm up routines suggested that we were in for a hard game.

With this in mind, Aston set off to control the game from the off, and after initial exchanges, an excellent three quarter movement resulted in Rachel touching down in the corner.

Intent on maintaining control, from the kick off Aston showed their determination with some superb handling, with Jess making a strong break to set up another excellent passing movement which was finished off by Kirsten with a further try, which Rachel converted. Sophie set the scene for the next score with a strong run, continued by Bex who offloaded in a tackle for Rachel to increase the lead.

Aston’s pressure was unrelenting from which Becky broke the Northampton line on halfway followed by a 50 metre run to the line: 22-0, and the opposition looked shell shocked.

Taylor finished off another three quarter move with a strong run to score a further unconverted try for a 27-0 half time lead.

The second half started as the first half had finished, with Caoihme scoring under the posts with a strong run from halfway. Next was an excellent team effort with the ball passing through many hands before Caoihme again touched down, and this was followed in similar style and finished off by Bex.

In fairness, Northampton never gave up, and made scoring more difficult, but after another period of fierce pressure another superb passing movement was illegally halted, Leah took a quick tap to score under the posts. Rachel converted.

Jess intercepted to score a further try which Rachel converted, and the scoring was complete when with Caoihme’s hat trick try finished off a fine handling move, with Rachel again converting.

This win was a superb team effort with tries scored from excellent handling, but these were set up by the superiority of the pack, with Sophie, Jess, Sam and Jenny leading the way.