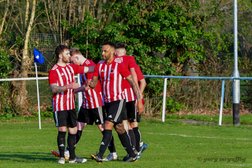 ADDERS MAKE IT 25 UNBEATEN IN THE LEAGUE

Atherstone Town pick up another important win away at Coventry Copsewood.

Atherstone Town moved within 2 points of the league title after a 3-1 win away at Coventry Copsewood on Saturday.

Mitch Piggon had given the Adders a first half lead before the home side equalised just after the break.

Late goals from Jorrin John and Joe Obi secured a vital 3 points for Atherstone, who are now 1 win away from becoming champions.

They will look to secure that win as they travel to OJM Black Country next weekend.

Coming off the back of last weeks 0-0 draw with Dudley Town, their was no doubting within the Atherstone team that opponents were going to make securing the Midlands Football League Division 1 title as tough as possible. Coventry Copsewood we’re no exception to that, sitting behind the ball and looking to frustrate the Adders.

Atherstone controlled the possession in the first half, and found themselves in front just before the half hour mark. Mitch Piggon latched onto a long ball over the top before hammering a strike past Dale O’Donnell in the Copsewood goal.

The Adders stayed on top of the home side but struggled to carve out clear cut chances for a second goal. Going into the interval, the away side could not afford to rest on their laurels but unfortunately that may have been what happened.

Copsewood started the second half much better, and caught Atherstone cold with an equaliser. Connor Robillard was on hand to finish off a swift attack, firing the ball past Carl O’Neill.

The league leaders responded well to the goal, regaining the initiative they had lost at half time. Ryan Quinn nearly put Atherstone back in front with an effort from the edge of the box which hit the bar on its way over.

As time ticked on it looked like being another frustrating afternoon, until Darren Eggleton played a long ball into the channel for Joe Obi. Obi worked relentlessly to get a cross into the box, which was smashed home by Jorrin John at the far post.

The celebrations from the travelling fans had just about died down when the win was wrapped up. Obi was the scorer this time, picking up a loose ball and showing great composure to slot the ball home.

The 3-1 win leaves The Adders requiring just 1 more win from the remaining 5 games, and was their 25th unbeaten game in a row. 11 points clear of 2nd place, attention now turns to the trip to OJM Black Country on 2nd April where promotion and champion status can be confirmed.

Nothing is decided yet, but it is a close as it will ever be. The lads will need the support of the travelling fans more than ever next week, so get along and let’s get this title over the line.