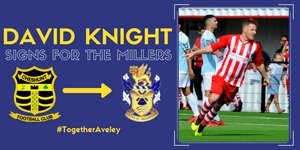 We are delighted to announce the signing of striker David Knight from Isthmian Premier League side Cheshunt.

David Knight joins us from Cheshunt after making six appearances for them this season and scoring in a 2-0 win away at Margate. In the 2019/20 season, he joined Tilbury in early November scoring a hat-trick on his debut at home to Histon in a 5-0 win and went on to score 19 goals in 21 appearances. He started the 2020/21 season with The Dockers but moved to Cheshunt to join Craig Edwards – but has opted to move to The Millers.

In the 2016/17 season, he was at Bowers & Pitsea and made 31 appearances scoring 17 goals, and the season after he scored 15 goals, but he was at the heart of the team during the 2018/19 season when Bowers stormed to the title with David Knight scoring 42 goals in 43 appearances. In Bowers & Pitsea’s first season in the Isthmian Premier League David Knight scored four times in 8 starts before moving to Tilbury.

Prior to David Knight’s day at Cheshunt, Bowers & Pitsea and Tilbury he was at Hornchurch, helping The Urchins to the Play-offs with 21 goals in 42 games, making it to the play-off final before losing 3-1 to Harlow Town. During the 2016/17 season, he made 10 starts scoring two important goals including an equaliser against Brentwood and a winner away at Norwich United before making the switch to Bowers & Pitsea. In total, David scored 79 goals in 134 appearances for Bowers.

We’d like to welcome back David Knight who is no stranger to the older Aveley supporters, and we look forward to seeing Knighty back in an Aveley shirt.

If you’d like to sponsor David Knight for the 2020/21 season get in touch with us at aveleyfcmedia@gmail.com.