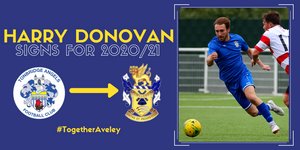 Aveley Football Club are delighted to announce the signing of central midfielder Harry Donovan who joins from National South side Tonbridge Angels.

We are delighted to announce the signing of midfielder Harry Donovan who joins from National South side Tonbridge Angels.

A central midfielder, Harry started in youth football at Arsenal as part of their Academy and played in the Under 18’s and also featured for The Gunners U19 side in the Uefa Youth Cup. From Arsenal, he moved but stayed in London joining Millwall and their Development Under 23 side. Harry showed great potential at The Sky-Bet Championship side and captained Millwall Under 23’s, Donovan went on to make several first-team substitute appearances in the Carabao Cup under former manager Neil Harris at the beginning of the 2018/19 season.

After those appearances, Harry joined National League side Dagenham & Redbridge to gain more experience and featured in 20 games, playing left midfield, right midfield, defensive midfield, and central midfield. After returning to Millwall due to his loan ending at Dagenham & Redbridge at the end of November – Harry was then out on loan at Havant & Waterlooville at the back end of the 2018/19 season, joining at the start of March and was involved in 7 matches.

Harry joined National South side Braintree Town and then Tonbridge Angels and featured for the Angels until the season was forced to end, he also scored in a local derby on New Year's day against Maidstone United. After leaving Tonbridge Angels in July 2020 Harry Donovan now joins The Millers.

We look forward to seeing Harry Donovan in a Millers kit for the 2020/21 season.