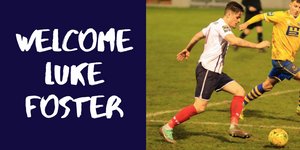 We are delighted to announce the signing of winger Luke Foster who joins from Witham Town.

Luke started last season at Brentwood Town where he made 18 appearances and scored goals against both Basildon United and Coggeshall Town with both goals vital helping Witham to a share of the spoils against two teams who were in red hot form at the time.

Foster departed The Brentwood Arena at the back end of November and joined Witham Town where he went on to make 22 appearances and in the end, helped them stay up in the Bostik North.

Luke now joins the Millers and a manager who he played alongside a few seasons ago at Brentwood Town.

Luke Foster on why he joined the Millers: "Dafter gave me a call and we had a conversation about what Aveley want to achieve this year and it ticked all the boxes for me. I think it's a good opportunity for me personally as I want to compete at the top end of the table and I couldn't turn down being part of this project, I'm really excited to get going."

I'm looking forward to meeting everyone at the club as I've heard good things. I'll be doing the best I can for the team and to help us achieve success this season.

I want to achieve promotion this season with the club and I have set myself targets on goals and assists for the season so hopefully, I can hit those this year!"

Millers Boss Danny Dafter on bringing in Foster: "Luke is someone who I played with at Brentwood, he is a player that was on our shopping list when we sat down at the end of last season. He's an exciting prospect who we are pleased to get on board."

Everyone at Aveley Football Club looks forward to seeing Luke in an Aveley shirt next season.

Be a part of it next season and #BackTheMillers by getting your Early Bird Season Ticket.