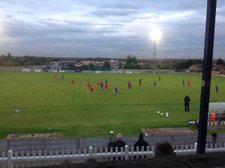 Aveley came out fully on top after an emphatic victory over AFC Sudbury on Tuesday evening.

Straight from the outset the Millers were in control with the first action of the game coming from a free kick that Billy Coyne took, he put it straight onto Junior Baker, who flicked it onto Lee Weemes who angled it towards the goal but the offside flag went up straight away. Petrit Elbi was then fouled but this time the free kick caused no danger as it goes straight into Alex Archer's arms.

A penalty shout just a few minutes later after a long throw in by Billy Coyne, caused danger in the AFC Sudbury box, Spencor Harrison gets shoved over, but the referee was unmoved. Teddy Nesbitt was a live-wire throughout the game as he skilfully went past two player, but in the process is taken out by Lawrence Yiga as Teddy drove towards the goal. Billy Coyne gets ready to line-up another special goal, but this time the free-kick goes into the top of the wall and out for a corner. The subsequent corner is cleared only out to Teddy Nesbitt on the wing who whipped the ball back into the box to a free header for Junior Baker, but it seemed to come to him unexpectedly and he headed it comfortably wide of the Sudbury goal.

The Aveley breakthrough arrived in the 15th minute after Lee Weemes broke the offside trap with great pace, he ran to the byline used great vision to pull the ball across the Sudbury box to the arriving Teddy Nesbitt who beat the challenging defender towards the ball to put it into the empty net. Aveley 1-0 AFC Sudbury.

After Aveley's goal, AFC Sudbury looked like they had finally woke up and their first real shot of the game came on the 20th minute. Jake Reed came inside onto his favoured right foot but the Sudbury man fired wide as his shot didn't really cause any danger for James Marrable in the Aveley goal.

The hard working Lee Weemes won a throw in deep inside the Sudbury half, Billy Coyne took the long throw in however, Sudbury cleared and countered with great gusto only for the ever reliable Junior Baker who defended and cleared well. AFC Sudbury started to get back into the game, they then used their own long throw-ins via Michael Shinn. But to no avail because of the lion hearts at the centre of the defence for the Millers.

Aveley made it two as Teddy Nesbitt involved again, was on the left hand side of the pitch, he crossed the ball in which deflected off AFC Sudbury's right back into the path of Petrit Elbi who headed home from 8yards for his first goal of the season. Aveley 2-0 AFC Sudbury.

Only negative of the whole game was the injury of Sammy Knott who challenged for the ball on the floor, but he screamed out in agony as he seemed to twist his knee, a few minutes later he was then replaced by forward Marcus Elliott, meaning Teddy Nesbitt dropped back to left back in the 36th minute of the game.

After an AFC Sudbury corner, Aveley countered with the pace of Danny Francis as he breaks the offside trap, he delays the ball in to Lee Weems but then Francis delivers but the cross was just over the head of Lee Weemes. The scoreline remained the same after that huge chance.

The biggest chance for AFC Sudbury came in the 45+3 minute, James Baker shot from the edge of the area was saved brilliant by the superb James Marrable. The follow up was then put over the bar by Ollie Hughes for a goal kick.

AFC Sudbury come flying out of the blocks for the start of the second half with a corner providing Ryan Henshaw with a fantastic opportunity which he spurred over the bar and the Millers survived. Up the other end Petrit Elbi seemed to be through on goal, but his second touch just let him down and it went straight to the Sudbury goalkeeper.

AFC Sudbury were doing their best to try and find a way back into this game but Aveley were fantastic in closing down their opponents, they showed desire and great tenacity to deny Sudbury any chances at all. A horrific tackle of frustration came in from Sam Clarke, and a huge melee broke out over it, it finally calmed down and the referee began to get his cards out, I don't know who he booked as he seemed to book every single player near him. I think Lee Weemes got yellow carded, but I have completely no idea why.

Somehow the Aveley clean sheet was still intact was the ball was crossed in for Jake Reed as he turned, shot but Spencor Harrison threw himself into the path of the ball and it was deflected behind for a corner. The corner was whipped in and the AFC Sudbury substitute, Payton Swatman, who had a free header and but for a magnificent fingertip save by James Marrable, out for another corner. Then that corner came in and it caused chaos in the Aveley penalty area, somehow with all the bodies going for the same ball it was cleared, and somehow is remained Aveley 2-0 AFC Sudbury.

Elbi was then put through on the left hand side of the pitch as Sudbury threw everything at Aveley leaving gaps in their defence. Elbi was one on one with the goalkeeper but just put it wide of the goal. A few minutes later Petrit Elbi was denied again this time by a superb instinctive save by Alex Archer in the Sudbury goal. It came after superb skill by Mathias Bakare as he left a defender on the floor, he then crossed the ball in for Elbi who headed again, it looked a certain goal but for the superb save.

In the 89th minute, Aveley made he change of Lee Weemes going off and on came Lewis Jones for his debut since arriving at Mill Field last week.

With seven minutes added on there was actually only one more chance, and it was a moment of magic from Teddy Nesbitt. Already a contender of goal of the season for Aveley, as the millers found the gaps in the Sudbury defence down they left hand side as Marcus Elliott played in Teddy Nesbitt, he ran towards goal chipped the ball inch perfect over the goalkeeper and into the back if the net. It was truly a wonder goal and he then took his top off in celebration which was brandished by a yellow card, defiantly worth the fine, due to the outstanding quality of that goal. Aveley 3-0 AFC Sudbury.