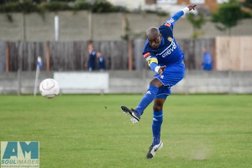 Aveley come from behind to take the spoils

Sign of a good team when you don't play that well and still manage to win the game 2-1.

After having to make two late changes to the defensive line, Sammy Knott having to pull out just a few moments before kick off due to an injury sustained against Sudbury that managed to rule him out. Spencor Harrison also had to pull out due to a neck injury. In came Aaron Gayle and forward Marcus Elliott.

In the early stages of the game Chatham attacked Aveley's goal with great gusto. The first attack by Chatham came from the right hand side where Luke Medley crossed the ball in dangerously but the fantastic James Marrable cut the ball out before Austin Gacheru could have tapped the ball home.

Chatham's live wire was ex-Aveley man Ade Yussuff, his great pace caused trouble throughout the entire game. And he showed his superb pace as they countered down the left hand side and Ade's cross was cut out by Billy Coyne as he tracked back from his free kick he took out.

Aveley then showed what they could do on the counter after Marrable punched the ball away from a Chatham corner, Danny Francis carried the ball from edge of area past the half-way line but didn't spot that Lee Weemes, who screamed for the ball, was in an acre of space, but Francis was fouled and the subsequent free-kick we t straight out for a goal kick.

Chatham defender then fouled Lee Weemes as he pushed Lee in the back. Billy Coyne took it quickly out wide to Matty Bakare but the ball goes straight into Tom Wellham's hands. He threw the ball out quickly to Ade Yussuff, he beat Teddy Nesbitt to the Aveley box and fired his shot low and hard, but the safe hands of James Marrable kept the scoreline goalless.

Chatham attacked again and Aaron Gayle held Medley back from his attack and because of that he was given the yellow card.

Aveley got their second corner of the game as Teddy Nesbitt put in a great ball, but it was headed away and Chatham countered yet again, as Luke Medley put a defence splitting pass threw to Ade Yussuff who found himself behind the Aveley back line, with the half to himself, he sprinted towards goal and toe-poked it past the unlucky Marrable in the Aveley goal. Aveley 0-1 Chatham.

The game then settled down after the goal and no real other chances were created by either team.

After a very poor first half, Justin Gardner seemed to put a rocket up the backsides of the players, and it worked. Aveley began to express themselves in passing build up by Alex Stavrinou who dunked a ball over the top for Danny Francis but that time he just couldn't keep the ball in.

The next attack Aveley had was the equaliser, Lee Weemes at first scuffed his shot went over to the far side but stayed on the pitch. Marcus Elliott didn't give up on the ball, he pulled it back to Billy Coyne who floated a cross into the box which the Chatham goalkeeper flapped at and the ball fell for Petrit Elbi on his 99th appearance to turn the ball into the back of the net. Aveley 1-1 Chatham.

Few minutes later, after Junior Baker had fouled someone the referee seemed to want to talk to Aaron Gayle, who was already on a yellow card, and he looked to have been sending Aaron off, but as Gayle walked off the pitch on came Aziz Kanu for his league debut for Aveley. From hindsight it looked as if the referee had told Aveley managing staff to substitute Aaron Gayle before the referee sent him off for no reason at all.

The referee then decided every player wearing blue deserved to be yellow carded. So he then gave one to Petrit Elbi for nothing more then what Chatham had been doing all game to waste time. Petrit Elbi was then changed by Joe Bricknell. Just a minute later the referee then pulled out a card for Aziz Kanu for again nothing I could see.

The ball was played down the right hand side for Danny Francis who wriggled skilfully past two Chatham defenders pulled the ball back on a plate to Marcus Elliott who gobbled up the chance and smashed home from eight yards out to put Aveley infront for the first time in the game. Aveley 2-1 Chatham 75th ish minute.

Another moment that then baffled all of the crowd as Teddy Nesbitt is shoved to the ground by Jamie Taylor as he raised his hands, however the referee who was next to the incident gave both players a telling off.

James Marrable was the man of the match for his outstanding saves made throughout the game and none more important as he is quick off his line to command his area wonderfully from a promising Chatham chance.

Another booking for Aveley in the 86th minute as Joe Bricknell was then given a yellow card, and yet again I didn't notice why the card had been given. Danny Francis was then taken off and on came Perry Tamburrini for his Aveley League debut.

Two minutes was then added on, and Perry was given a yellow card for kicking the ball away. But we were still playing in the 90+7 minutes, and because of this a horrible head injury occurred for Lewis Knight as he suffered a cut on his eyebrow which all of the physio staff treated him. Eventually on the 90+12 minute mark of the game the referee blew his final whistle. After a poor first half, the Millers took control of the second half and thanks to James Marrable making some vital saves, Aveley took the three points.

Sign of a good team is when you don't play well, but you still come out victorious.

Man of the Match: James Marrable.