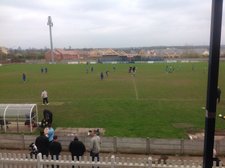 In the early stages the visitors were in control. Within the first minute Mead almost took the lead, Gordon-Young created the space and played it into Hopkins but the shot took a deflection on its way to Marrable.

Only a matter of moments later Gordon-Young again got through on goal but again Marrable denied as he tipped over at the near post.

From the resulting corner Thamesmead came close again. Uwezu crossed the ball into the near post, it was flicked on by Butler towards the back post but Fenner headed wide of the target.

The hosts almost took the lead after good work by Liam Nash he played it on to Petrit Elbi and his volley went just wide of the target.

The deadline was broken as Thamesmead came forward, again with Tyrus Gordon-Young he did a reverse pass to Michael Uwezu who tucked it away well into the back of the net. 1-0 Thamesmead.

The visitors soon doubled their lead after good work down the right hand side, lead to a cross into the Millers area and Spencer Harrison diverted the ball past his own goalkeeper. 2-0 Thamesmead.

Just before the break the Millers did finally get a clear shot at goal and it gave Aveley a way back into the game. A lovely pass to Steve Willis landed to his feet as he ran down on goal he passed it across to Liam Nash he smashed home his second goal in two games. Aveley 1-2 Thamesmead.

The Millers made two changes as Theo Ola and Luke Stanley came on as Brandon Scott and Jamal Jimoh-Deen made way.

Aveley came out the stronger side as Petrit Elbi had a shot flash wide. Sammy Knott also kept up the high pressure but his cross was cleared away by the Mead defence.

But the sucker punch came as Thamesmead extended their lead again with Michael Uwezu. Flicked on by Gordon-Young and Uwezu finished superbly into the bottom corner. 3-1 Thamesmead.

A yellow card was the awarded to Michael Spencer as he took down Theo Ola after he skipped past him.

Aveley needed a bit of magic and their top goal scorer did it. Petrit Elbi on his own 25 yards out chested down and turned towards the goal and squeezed the ball into the bottom corner. Aveley 2-3 Thamesmead.

It was well and truly game on as a minute later Mead were down to 10 men. Derek Duncan raised his hands to Luke Stanley who went down holding his face, and Duncan was awarded a straight red with 15 minutes remaining.

It only took five minutes for the Millers to strike up another superbly taken goal. Arian Retkoceri this time danced round a few players before beautifully curling the ball into the back of the net to equalise. Aveley 3-3 Thamesmead.

The Millers piled on the pressure but it was to no avail as Thamesmead managed to hold onto a well deserved point.

It wasn't the last action of the game as Mead were reduced to nine men. Michael Spencer picked up a second yellow card after a shoulder to shoulder challenge took down Theo Ola.