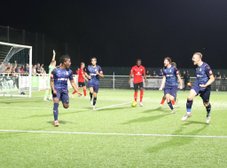 A superb performance saw The Millers dominate and defeat Billericay in our first home game of the season.

A fantastic performance saw a relentless Aveley rewarded with three points after Bryan Ifeanyi tapped home after Ryan Scott's long ranged free-kick effort was kept out, but Ifeanyi was the quickest to react and tap home from 10 yards out.

It was our first league victory over Billericay since February 2010 and it was worth the wait in front of a superb crowd of 746.

We started off the game on fire with Bryan Ifeanyi making a great run from the halfway line, he dug a cross into the box but no one could get on the end of it and was cleared for a corner. From the resulting corner Ryan Scott rose highest but directed his headed effort just over the bar.

It was wave after wave of Aveley pressure but Billericay remained strong with George Sykes shot deflected wide of the goal. Jon Nzengo was next to try but he fired over Harry Seaden's goal which was living a charmed life.

Billericay came out and had a couple attempts at goal which saw David Hughes forced into his only save of the game on the 57th minute as he kept out Ebuzoeme's shot from outside the area.

On the 67th minute the deadlock was finally broken. A free-kick just outside the Billericay box was well struck by Ryan Scott, Seaden saved well low to his left, but it was Bryan Ifeanyi who reacted quickest and finished the rebound finding the bottom left hand corner. Aveley 1-0 Billericay.

The Millers could've and probably should've been awarded a penalty a minute after going ahead, Tom Stephen darted into the box was tripped and fouled, but the appeals were waved away.

We carried on attacking and hunting for a second goal, Tom Stephen went close with a free-kick as Seaden managed to save it and rely on his defenders to get to the rebound this time to clear the ball away. Manny Ogunrinde made an impact from the bench and almost scored but for an incredible last ditch tackle from Agyemang. Captain Connor Witherspoon was next to attempt at goal, but he fired just wide of the goal.

George Sykes came within millimetres of scoring a wonderful goal, he dribbled past the Billericay player making him fall to the floor, curled an effort at goal, but it smacked the inside of the post and somehow didn't go in.

Garrett Kelly linked up with Manny Ogunrinde which saw the latter in one goal, he fired towards the target but saw his shot just wide.

As time ticked away, there was one last bit of drama as Garrett Kelly was shown a staight red card, both players raised their hands, but Garrett was shown a straight red card to put The Millers down to ten men in two straight games - 2 red cards is more than we had throughout the entire last season where we only received one.

Despite the red card qand going down to ten men The Millers stood strong for the final minute and saw out a fantastic victory and three points.