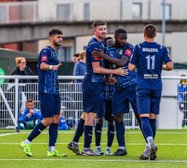 The Millers and Herne Bay played out a one-one draw at Parkside after George Sykes put the hosts ahead from the spot but it cancelled out by Rory Smith.

It was the visitors who had the ball in the net first, but the ball was adjudged to to have gone out for a goal kick in the build up as Chris Edwards centred.

After that disallowed goal, Aveley started to dominate with Brendon Shabani denied with a block from close range and then Manny Ogunrinde rounded Perrin in the Herne Bay goal but couldn’t squeeze in his effort under pressure from Jack Parter.

Three minutes into the second half and Aveley were gifted a chance to go infront, a cross into the box struck the arm of the Herne Bay defender and the spot kick was awarded. Aveley top scorer George Sykes fired in his fifth of the season and put the hosts ahead.

Within 15 minutes the visitors got themselves back level, scoring their first goal in the Isthmian Premier since the 29th of August, Millers central defender saw his header latched onto by Rory Smith who found a superb finish into the goal to level the score.

There was one last chance for Aveley to take the points late on, a corner from Benas Vaivada found Harry Gibbs who headed goalwards but a clearance off the line by Keano Robinson ensured the scores stayed level and both sides were forced to share the spoils at Parkside.