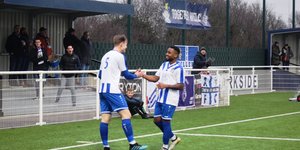 A dominant display from The Millers as we went top of the league after this game after goals from George Sykes, Harry Gibbs and a brace from Alex Akrofi were enough in a dominating performance despite two late Witham goals which had the scoreline perhaps flatter the visitors.

We started the game wel las Alex Akrofi saw his effort from the edge of the area curled over former-Miller Rhys Madden's goal.

Alex Akrofi was involved in our next chance as he whipped in a dangerous cross from a free-kick to Harry Gibbs who was somehow denied point-blank range by the returning keeper.

Wyan Reid connected well with Alex Akrofi to set up a chance for Wyan, but the winger just saw his right footed effort go just wide of the right hand post.

We weren't to be denied for long as on the 30 minute mark we took the lead. The ball bounced around the penalty area, Jack Mochalski was denied the ball came to George Sykes who found the bottom left hand corner. Aveley 1-0 Witham Town.

On the half time mark we doubled our lead. From a throw-in on our right hand side Wyan Reid and Jonathan Nzengo connected to find Alex Akrofi who dribbled past one and smashed into the roof of the net from close range. Aveley 2-0 Witham Town.

We made the perfect start to the second half as we scored our third, a free-kick from Jonathan Nzengo was taken, it was initially won by Harry Gibbs who headed it down to Alex Akrofi, Akrofi delivered finding Harry Gibbs who connected and looped his effort over Madden who could only just watch it find the back of the net. Aveley 3-0 Witham Town.

Soonafter it looked like we could've got a penalty as George Sykes danced round three players but the referee waved away protests.

The game was wrapped up on the 65th minute as David Hughes knocked a long ball forward, it found Alex Akrofi who controlled, went past a defender and found the bottom left hand corner of the goal with a clinical finish. Aveley 4-0 Witham Town.

After that goal we seemed to take our foot off the gass, as Witham found two late goals to make the game seem closer than what it was.

With five minutes to go Marcus Bowers bundled his header over the line after a cross from Scott Kemp. Aveley 4-1 Witham Town.

Tom Richardson was so unlucky not to get on the scoresheet, a cross in from Wyan Reid found Richo who saw his first effort hit the post and then his second effort somehow blocked and scrambled away.

The visitors then pulled one more goal back, Scott Kemp who created Witham's first, scored Witham's second as he dribbled into the box and finished well past Hughesy. Aveley 4-2 Witham Town.