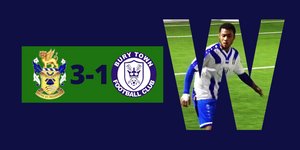 In horrendous conditions The Millers get three points after goals from Wyan Reid, George Sykes and Harry Gibbs.

It was a battle with Aveley and Bury going up against the conditions, who could handle it better and come out on top? The Millers were in control for most of the match. Both teams tried to play football, of course the pitch is perfect to do that, but with the swirling wind catching the rain it made it difficult for all to combat against that.

We started brightly with the wind up our backs, Jason Raad's effort almost snuck in but a smart save from Daniel Barden after a deflection from Will Gardner almost went into the goal. Sam Mvemba's teasing cross was almost poked home by both Alex Akrofi and George Sykes but they both couldn't get on the end of it and it was out at the far post.

Jason Raad was next to try his luck, the ball barely stood still on the edge of the box after Raad was fouled, he stepped up to take the free-kick but his effort just looped over the crossbar.

The opening goal was coming and eventually the pressure told. Corner in from Jason Raad was met by the head of Harry Gibbs who powered his header across the line, despite the best efforts of a clearance off the line, the ball was clearly over and the linesman waved for the goal to be given. Aveley 1-0 Bury Town.

After our first we almost scored our second. Alex Akrofi crossed for George Sykes but the diverted shot was well saved by the visiting keeper. The resulting corner came to Harry Gibbs, but on this occasion he couldn't keep his effort on target from 15 yards out.

Soonafter we almost made it two, Alex Akrofi won possession 30 yards out, found Jason Raad who attempted to curl it into the far corner but it curled an inch past the post.

Despite our control and bright start to the second half we found ourselves pegged back by Bury Town, a long ranged effort along the ground seemed to just squeeze under David Hughes in The Millers goal and Nyadzeyo got the visitors back on level terms. Aveley 1-1 Bury Town.

The level scoring didn't last too long as about two mintues later we went back in front. Ball forward to George Sykes he is then able to apply the touch to take it over the on-rushing Bury keeper and into the back of the net. Aveley 2-1 Bury Town.

The visitors did come back and they came close to equalising, Hood tried his luck from almost 30 yards out which smacked the post, it came back to Cemal Ramadan who should've probably scored, but fortunately for us, he nodded the ball wide of the goal.

Despite that chance we made sure the game was wrapped up with 10 minutes to go. Wyan Reid took aim from the edge of the area and managed to find the bottom corner to secure all three vital points in horrendous conditions. Aveley 3-1 Bury Town.

The last notable event that happened was Under 18 and Under 23 player Jack Chawner made his first team debut after superb performances at youth level this season. Well done Jack!