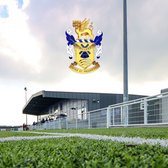 Billy Holland’s 80th minute penalty for Aveley was all that separated the sides at a rain soaked Mill Field against a dogged Romford.

The Aveley captain converted from the spot after the referee had awarded a penalty for handball by Paul Clayton in what was a poor game in tricky conditions.

Two excellent saves, one from either side’s goalkeeper, kept the match level at the break and it looked as if the two sides were headed for a stalemate before Holland stepped up to score the winner.

Holland led out a side that was unchanged from Monday night’s win over Chatham Town as manager Justin Gardner did feel the need to tinker with a winning side.

With the inclement weather in the region the pitch was heavy and it showed from the outset as the match started slowly with neither side able to take a foothold on the game.

Romford were dealt a blow early on when, within quarter of an hour, they had to switch their goalkeeper with Atu Ngoy being replaced by Aaron Omand but the Millers failed to test the substitute ‘keeper early on.

It wasn’t until the half hour mark when anything that could be deemed a chance cropped up and it was the away side that had the opportunity.

A cross from Kurt Smith was driven low towards the centre of box finding Lewis Francis around the penalty spot, but the number 10’s first time effort was volleyed just wide of Jack Giddens’ right hand post.

Aveley’s best chance of the half fell to birthday boy Shane Oakley and he’ll still be wondering how he didn’t score it after Junior Appiah was played in down the right.

The winger’s low cross had the defenders and goalkeeper scrambling as the ball fell to Oakley who, with the goal gaping, saw his effort somehow deflected over the bar by Omand.

A loose pass from Brian Okwera was latched upon in the centre by Romford who had the ball slid into the path of Ryan Lambert, but his shot flashed across Giddens and wide.

Moments later and Lambert again had a chance of goal, finding the target but finding Giddens equal to it as Giddens palmed the striker’s effort round the post and away for a corner to keep to scores level at the break.

As the rain came thundering down in the second half chances became few and far between but the referee was being kept busy as a number of late challenges in the slippy conditions resulted in a number of yellow cards.

It wasn’t until after the hour-mark that we had a notable effort on goal, with Okwera glancing a header just off target from a Teddy Nesbitt free kick.

Second half substitute Anton Stephenson had a snap shot go just wide moments before having a one on one chance taken away from him thanks to some last ditch defending by Paul Clayton.

James Ishmail had the visitor’s best opportunity of the second half fall to him after being found unmarked at the far post by Joe Oates. But the Romford centre back dragged his left footed shot wide as we edged towards the close.

Billy Holland had the Aveley bench on their feet after it looked like he had finally broken the deadlock. But after getting on the end of a Ross Wall cross to the far post the Aveley skipper was unable to direct his shot on target.

But less than two minutes later the Millers were given the chance to open the scoring from the spot after Romford captain Clayton was adjudged to have handled in the area as the referee pointed to the spot.

A cross from Appiah on the right fell to Wall in a central position. After fashioning enough space to get a shot away, Wall toe-poked the ball towards goal only for Clayton’s outstretch elbow to stop it on its way to goal and after a few seconds of deliberation the referee awarded the penalty.

Holland stepped up confidently to side foot the ball into the roof of the net to give the Millers a priceless lead with 10 minutes remaining.

As the game ticked over into injury time Romford carved out one final chance to snatch a point in the second of four added on minutes.

A first time ball split Adam Flanagan and Bradley Thomas and allowed Smith goal-side. After selling Flanagan with the drag back, Smith looked certain to have a strike on goal, but instead tried laying it inside allowing Kallon Nurudeen to desperately clear as the Millers held on.

“I wouldn’t say it was a great performance, but it was a team performance” said Gardner after the match.

“We dug in, we kept going and going and it’s always horrible to lose to a penalty but if you talk about chances I think we deserved the win.”

A shattered match-winner, Billy Holland said “to be honest it was quite flat out there all over, but we dug in, done what we had to do and got the three points.”

Returning assistant manager, Victor Renner, agreed with his captain’s sentiments saying “first half we were a little flat” before going on to say “during half time we were saying all you need to do is up your work rate. Sometimes when things are so flat if you up it you get what you deserve.”

“It was very, very, very wet and it was a hard pitch out there today, but the boys dug in and to nick it at the death – they got what they deserved.”