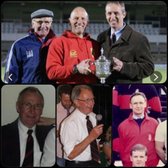 Born on 14th January 1937 in the south Wales steel town of Port Talbot near Aberavon. Malcolm was one of three children brought up with his older sister during the Second World War.

At the age of 11 Malcolm passed the exam for the local grammar school where his love of sport began, playing rugby and cricket for the school. During his school years, he played for and captained Port Talbot and Glamorgan Schools rugby and cricket teams.

On leaving school he completed National Service with the 23rd Field Regiment R.A. Malchy played both rugby and cricket for the Regiment and also did some boxing. Following his National Service he spent two years at St Luke’s College training as a maths and PE teacher. It was whilst at college that he met Janet, his wife.

In September 1959 he began teaching PE at Portway Boys School. It was a role he loved and his enthusiasm and commitment saw the school build a strong reputation in both rugby and cricket. Malcolm was very proud of many moments during his time at Portway but no more so than when four players from the school (Les Walker, Mike Cousins, Trevor Alder and Donald Westcott) played in the same Bristol Schools XV. Also, seeing David Holloway gain his Schoolboy International Cap – sadly David lost his life in a road accident shortly afterwards.

Whilst in his early years of teaching at Portway School, Malcolm joined Stokes Croft OB RFC where he played at 10 – he spent many happy years there forging life long friendships. He was selected for Bristol Combination and Bristol United (1964 saw him play in the same United side as Rodney Kennett and a young Mike Rhodes). During his time at Portway he also began a long association with Bristol Schools Rugby in which time Bristol was seen as the strongest team in the South West and produced several English Schools internationals.

With his playing career over and due to the close links he had established with Avonmouth OB RFC, he joined the club while still based at the old ground and became their trainer – a great time followed as Avonmouth was considered one of the strongest sides in the Combination at that time.
Malcolm always had fond memories of those times at the old club, he considered Mike Rhodes as one of the best players and captains in local rugby that he was fortunate enough to work with.

He was approached by Mike Shore one Saturday afternoon and asked if he would help the club further as Avonmouth were looking to start a mini rugby section.
With plenty of commitments already Malcolm sold the idea to Janet as he would be taking their two boys down.

Malcolm’s passion for cricket as a youngster continued throughout his life which kept him busy throughout the year. He was a former president at Whitchurch CC & as at Avonmouth Old Boys and was also a life member. His love of both sports and the clubs he was affiliated to continued to grow with fond memories & stories being recalled during every visit.

To think of the teams and individuals he’s seen play at Avonmouth is astonishing. Avonmouth Old Boys will be a lesser place without hearing ‘Hello my good boy...’ on a Saturday afternoon in the bar but we have so much to thank Malcolm for as a club.
Malcolm was extremely proud to have been a life member and always enjoyed watching an Avonmouth side run out. He had time for everyone, was always a welcoming character, knowledgeable and a gentleman.

The Leyshon family wish to notify club members & friends that the funeral will be held on Friday 25th June 2021 at Midday at South Bristol Crematorium. A celebration of Malcolm’s life will be held after at Whitchurch CC.
With restrictions proposed to be eased further, the family have notified us that they will be laying on a coach to take club members from Avonmouth Old Boys to the crematorium and then onto Whitchurch CC. Please notify Grant Britton if you would like to reserve a seat.

All club members attending are asked to wear white shirt and club tie.