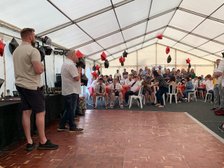 'King of the Mead' on hand to present awards...

Our junior section spent saturday evening in a marquee with a bear!
Bristol Bears Joe Joyce was on hand to present our juniors with their trophies at the junior end of season presentation for what has been a fantastic year of junior rugby at Avonmouth, all before giving us a rendition of a song thats been heard a few times by the bears team at the gate.

This years trophy winners were as follows: