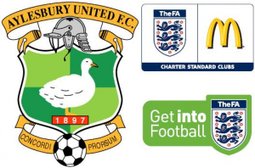 In 2022 Aylesbury United Football Club will celebrate its 125th year of football in the community.

Founded in 1897 when three local sides: Night School FC, The Printing Works and Aylesbury Town decided to merge, the club, affectionately known as 'the Ducks' due to the famous 'Aylesbury' breed, have experienced some incredible highs over their long history but now battle for existence without a home ground in the town to call their own.

Aylesbury United Juniors went on to have a rich history playing in the Wycombe and South Bucks Junior Football League, The South Bucks Youth League and the Chiltern Youth League. This continued until 1998 when some teams within the club broke away and formed Aylesbury Town FC and then in 2000 the last of the teams broke away and formed Aylesbury Athletic FC. This led to 13 years of not having youth teams in the town representing Aylesbury United FC.

Aylesbury United Juniors and its sister club, Aylesbury United Ladies and Girls FC are both FA Accredited Clubs that cater for both girls and boys. The juniors also support an Inclusive/Special Needs section that has seen growth in its members in recent years.

The FA accreditation programme is a kitemark, which recognises and rewards the high quality levels of provision in club and league football. The kitemark is awarded to clubs and leagues that are well run, sustainable, which place child protection, quality coaching and safety paramount.

In season 2017/18, with our sister club Aylesbury United Ladies and Girls we provided football opportunities for around 500 boys and girls, playing in age groups from Under 7’s through to Under 18.

The Juniors section now has in the region of 50 managers, coaches and volunteers associated with our teams.
Our Coaches/Managers all complete the FA Playmaker course prior to undertaking an Introduction to Coaching Course, which encompasses Emergency First Aid and Safeguarding modules.
All managers, coaches and volunteers that have contact with our players undergo enhanced checks with the Criminal Records Bureau in accordance with relevant Child Protection Regulations.

In 2005, we formed TOWNies, our Saturday morning club designed to introduce children to junior football from an early age and following the merger with Aylesbury United FC, this has now been rebranded as MiniDucks and is run in association with Bucks Sports Academy.

Early in 2013, we started providing Inclusive sessions for local children with disabilities / special needs. As a club we think that it is really important to provide everyone with the opportunity to play football so are striving to remove any barriers that stop people participating in this wonderful sport.

At the end of each season, the Club hosts its own Six-a-Side Football Festival, widely regarded as one of the best in the South of England, attracting over 250 teams each year.

The Club also celebrates the contributions and achievements of all players registered with Aylesbury United Juniors Football Club.

The Club's success to date and future plans are built upon the foundations of being a family Club, with the children’s welfare, education, personal development and enjoyment being the priority. We aim to ensure that everyone associated with Aylesbury United Juniors FC enjoy their participation in football and celebrate playing this wonderful game.

As a side note; more than ever, we need the greater involvement of parents. The club has grown beyond our wildest dreams, but the Committee needs more volunteers to step forward. Please show your appreciation to the opportunities being presented to your children, by giving something back to the Club. We are all volunteers, so every little helps.