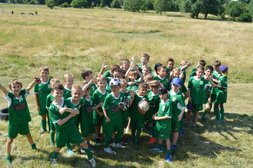 All the players participated in 9 rounds of foot-golf showcasing their chipping and accuracy skills in the mid season sun.

Thanks were extended to our huge team of volunteers and all the parents for making the past season as enjoyable and successful as it was.

The team ended the event by holding their trophies aloft and posing for pictures. We’ll be sending the picture the BBC and FA in the hope that it will be seen by the England team ahead of their world cup semi final against Croatia next week! No fear Gareth, the next generation of Aylesbury’s young footballers will be ready!