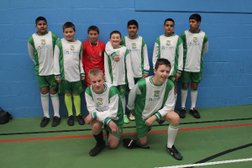 Back down to earth with a bump

Missing the goal scoring machine Asim and Abdul’s safe hands between the sticks it was always going to be a tough assignment. The fact that we won all 4 games last time out as well meant that everyone marked us down as the team they wanted to beat.

First match v Marlow
This was a really even game between closely matches teams. Marlow narrowly won 1-2 in an entertaining match

Second match v Aylesbury United
The big derby was a far closer game than the 0-3 scoreline suggests as both teams created chances, we just did not tuck ours away. An unfortunate injury to Jamie robbed us off his services for the rest of the day as well

So after 4 victories a fortnight ago we went to 4 defeats yesterday. All of the games were very competitive so plenty to build on. All of the lads again did themselves and the club proud with their performances and the way they conducted themselves throughout the day