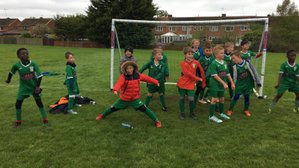 Heroes all over the pitch

U9s last home match of the season ends on a high

The team turned on the style and showcased their talents. Each player was comfortable rotating in their different positions, whether defensive or attacking, supportive of their team mates and each of our four goalies showed that they have stupendous saves in their lockers.

We relied on Jacob to be our safe pair of hands in the first half of our first match. He ended the morning with a fine hat-trick. Jacobs dad loved his volley and I was just as impressed with his first where we kept his calm and slotted past the advancing keeper while under pressure from chasing defenders.

Szymon is our midfield general. He bossed every situation and laid on a fine assist. The crowd whooped with joy at some of his close control!
George was all action today. He was alert to a rare opportunity to bag his second goal in two weeks taking a long range first time shot from a loose ball against a stranded goalie. The crowd held their breath as the ball screwed just wide of the gaol post. Unlucky George! You were fantastic.

Forget the famous SAS combination. We’ve got L&L. Lucas and Luca both kept wide when asked and pushed forward when we played with two strikers to stretch the play. Luca made good tackles and was always a threat pushing forward. Lucas on the other wing bagged himself two great goals in one half! A fine first time shot from a cross ball rose above the keeper gave him a taste for goals that he celebrated arms out stretched! Two superb finishes.

Christian was immense. What a fine save he made in goal, great strong W hands to parry a powerful shot over. Christian ran the opposition ragged and gave the home fans a performance to remember!

Euan was as reliable as ever, in goal and out on pitch. The crowd almost broke out into a chant of “He’s one of our own” after a great inception in our own penalty box that he quickly turned into a dangerous home attack.

A tradition serves, we were able to blood a junior player in our final home match to wet the appetite of the home fans as next season’s season tickets go on general sale! Riley made a brilliant debut. After only a handful of training sessions with the first team Riley showed that he’s ready for the big time. Riley has pace, a desire to pass out of trouble and read the game ever so well. Riley will be bound to come to training full of confidence and with the knowledge that he’s a fine footballer!

Well done chaps. It was great to watch!

Today’s JAW Building& Carpentry Services’ Team of the day was an easy choice!