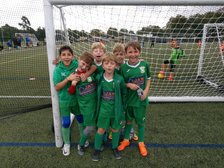 We have kick off

Summer tournaments are over, kids are back at school and the league season has begun. All is well with the world.

Marlow Royals welcomed us this morning. Marlow are a great footballing side and well organised.
3 new players made their debuts today.

Mason, Dale and Rory each showed great endeavour and willingness to work for their new team and started their Aylesbury careers really well with brilliant performances.

Noah scored a great solo goal, cutting in and curling beyond the keeper after a fine run. Seb finished clinically from a lovely team move which ended with Riley setting Seb free.

Rory was awarded man of the match for his great defending, Lucas for his dangerous runs, Noah for a fine goal and Riley for his heroic defending.

Player report:
Euan made some great saves playing in goal in our first half. Moving out onto pitch he had our first telling shot of the day that was flying in from distance accept for a great save from the Marlow keeper. Euan’s work rate was brilliant.

James was solid in goal but even better in defence. James marshalled the Marlow attack very well, we were very impressed. As a striker James saw little of the ball but was making good runs to find space.

Lucas was pairing up well with Euan and Austin, making forging runs into the opponents penalty box and receiving their passes and but for good keeping would have seen a couple of goals recorded against his name.

Seb put in a lung busting performance. His efforts were rewarded with a fine goal that he celebrated with an exceptional floss.

Riley grew in confidence as the morning progressed. Somehow he managed to always managed to get the ball just before the opponents and kept us in the game. Riley always sought to pass and gets better and better every time he plays. Well done.

Christian and Austin both played in goal, midfield and attack. Christian was crowded in midfield on small pitches and have little opportunity to show his speed and skill. When he did find some space he always created dangerous attacks that on another day could have ended with goals. Well done.

Austin got so close to saving a penalty, made really good throw-outs and had the confidence to shoot from distance several times. His through balls to our strikers in the second match we outstanding. Well done Austin.

George played together with Seb as a strike force in our second match to help move the team further forward. They also made critical interceptions and good forward passes when they had space in front of them. George pleased me greatly, remembering our goal kick routine and covering when asked to. Well done.

Luca - played in goal for the first match and made some wonderful saves early on and couldn't fault him for the goals conceded, second match was a blur on the left wing making some really good passes.

Adam - defensive runner all over the pitch as usual, made some good crosses for the strikers unlucky with his shots on goal today, went in goal for the second match pulling off some great saves again unlucky with the conceded goals

Dale - played well in defense, covered the area when on his own made some good defensive tackles

Noah - took a while to find his groove but settled in well and troubled the opposition, scored a brilliant goal which lifted the whole team

Rory - put in a committed effort , worked the midfield well and made good passes.

Lukasz - played in midfield and as a striker, had some really good efforts on goal

Michal -also played midfield and striker making some good tackles and keeping the pressure on the opposition.

Thanks to Dave, Dave & Steve for coaching and Russ for refereeing.
We'll remember the team photo next week.