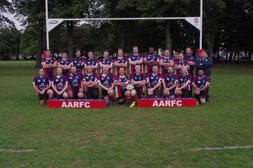 Aggressive pitch that couldn't be tamed

Aylestone did their best versus a tough and dirty opposition

A well drilled warmup and good conditions normally are a good sign for a fantastic game of rugby. We took the uphill struggle to begin with as the pitch had a steady slope on it all the way down to the other end.

Kick off happened, and we smashed up hard in both attack and defence. Holding firm and weathering the storm of crash balls from big forwards and nimble backs. For a solid 15 minutes we played a very strong game with our possession, hitting the ball up and sometimes breaking the gain line but with bodies all around the rucks, getting quick ball was nearly impossible. Our scrums and line outs were working well, but we lost our defensive purchase round the wings and they managed to break through and score the first try. We then rallied back and made our way almost to their 5 metre line, but didn't quite manage to capitalise, getting a fair number of dirty tackles coming our way and some headshots being popped here and there.

Frustration was high and we lost our cool a little bit, and they managed to break through with a powerful couple of runs from their number 8 breaking through the line and through to our try line again. Another try. We kicked off again to one of their big props who then managed to break through 4 tackles straight away and score a try, bowling over the small and slight wingers on his way down. After a rallying call, we kicked off again and fought back for a while before conceding another 2 tries.

Half time and we had numerous injured and battered bodies out on the field, but we did manage to win the advantage of having the hill to play down, but the score was a rather large looming mountain. Kick off, and we were up and at them again. We battered away and pushed them hard, keeping them in their half of the pitch for most of the game. More dangerous tackles came through, and the substitutes didn't last long in covering for the walking wounded. We made our way down to their 5 yard line and had another 4/5 chances with penalties to make the distance but kept getting held back. I managed to pick the ball up out of the back of a ruck, but managed to fall short of the line. More scrums and we finally managed to get over the line after what seemed like an eternity.

MOTM - Cillian Cook for an outstanding performance at scrum half despite being tackled straight off the bat at almost every ruck maul and scrum by an offside player. Special mention to Darrell in the backs for some brilliant crash balls through the centres, and Dan Heery for taking a monstrous tackle toward the end that looked like he had had the soul knocked out of him. Also well done Dan for surviving 80 minutes and still having a grim on his face afterwards ;)

DOTD - Hard to choose this week because Most of the dicks were in the opposition, but it goes to Jordan Black for ghosting the team with no explanation on a day when we were particularly short of backs.