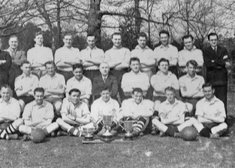 The football club was established in 1906, and for many of the early years the team played in the local Ascot and Woking district leagues.
In that period the club played matches at Pennyhill Park and Connaught Park in the village.
See team photo from 1953-54.

After more successful seasons in the Surrey Intermediate League the club then moved to the Berks and Bucks league, with the highlight winning the Maidenhead Norfolkian cup in 2007 before leaving for the Aldershot & District League.

After winning the Senior Division again in 2015–16, they were promoted to Division One of the Combined Counties League for the first time in the club history.
This is all due to the hard work and time that the Wickens family have put into the club over the last 40 years.