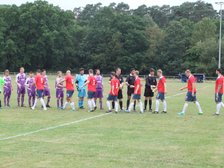 Bagshot started well and went 1-0 up in the 17th minute through Jordan Merriman following good work by Josh Wood cutting in from the wing.
Worcester Park’s two dangerous strikers were creating chances and equalized before half time through a great strike from Davison.
The second half Bagshot had to defend well and Park were controlling possession, but Bagshot hit back to go 2-1 up, Wes Kendrick scoring.
Worcester Park continued to press and eventually got a deserved equalizer, Davison again scoring from a volley.
However Bagshot continued to show great effort and fighting spirit, creating several chances, and with the referee confirming 4 minutes of added time, centre back Josh Cook hooked the ball into the box, and a Worcester Park defender could only divert the ball into his own net.
There was only time for one more Park attack and Bagshot held on for a great win.