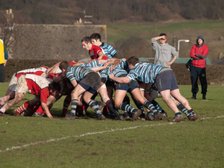 The Bakewell Ten triumph at Worksop

Yes, you read that right. As we approach the cricket season Mannerians and Worksop produced a high octane game that ended in a score more resonant of the leather and willow variety. Or indeed one of those Super Rugby games you see on the telly. Except this time people tackled. And when you factor in that for much of the game, thanks to some unhelpful late cry-offs, Rod Bell’s warriors were down to ten men against thirteen, Mannerians’ achievement comes into perspective.

Despite a troublesome pitch which featured some sudden areas of bog, the pace was frantic from the off, with Bell and James Bentley gambolling around like spring lambs, and John Everitt, making his first ever start at scrum half, firing out passes like he was born to it. An early blow came as Ben Clarke’s right leg was sucked into the swamp while his left remained on terra firma, and a tackle on the stranded leg saw him hobble off. No amount of rubbing by physio Tree Law could relieve Clarke’s stiffness and Mannerians appeared to be properly up against it.

But this was a day when the impossible became probable, and the sheer energy of the outnumbered Bakewell outfit led them to play some fast, accurate rugby. The forwards drove up the field, Everitt slipped the ball to fly half George Smith, and Smith put the in-form Dan Barratt away for the opener. Andrew Gregory-Campeau, who is fast becoming first name on the team sheet, scampered over for the second, with Everitt claiming the third after intricate work by Steve Harker and the mighty Bentley.

It was about now that Worksop realised that they had a three-man advantage and probably ought to use it. So instead of their traditional up-the-jumper style, they tried to play an open game, and this stretched the Mannerian defence, with Jack Pickford and Joe Harker prominent, and Everitt playing like a kind of sweeper, snuffing out the last man. But the overlap was inevitable, and the home side forced their way back into the game, until they were consistently just a try behind. But the important thing about Mannerians’ defence was that it forced most of Worksop’s tries to be out wide, making life difficult for the kicker.

Gregory-Campeau seems to have acquired a poacher’s instinct, and he raced to four tries over the game – a testimony to what happens if you work hard and keep up with play. On another day, earlier in the season, Mannerians might have run out of steam. Probably the best team try came from quick hands that involved all ten men, and started with a Bentley dive pass. Pickford ploughed forward, Smith produced a nice offload to Joe Harker, good lines and slick passing followed, and Everitt drew the last man before finding Will Adams looping round and cantering over to score. An impressed manager, Denzil Bowyer, was heard to comment “to look at him you’d think Will might be a mazy runner, but he’s like lightening. He rather reminds me of myself: a born winger, much misunderstood”

Inevitably, given all their work, the heaviness of the pitch and the fact they were at a numerical disadvantage, Mannerians tired slightly around the midpoint of the game, and with Worksop using the overlap, the home side nudged into the lead. Again, earlier in the season this might had led to a falling out in the ranks, heads going down and the expected defeat. But times are changing, and, spearheaded by Barratt, the visitors soon upped their game. Barratt’s pinnacle came as he thundered up the right touchline, and, seemingly penned in by defenders, began bouncing them off, five in total, before putting on the turbocharger and diving over under the posts. Everitt claimed his second, though it finished with a slightly disappointing dive. Photographer Mike Dabell, trying to capture the moment, claimed that “John’s lovely in many ways, but he’s no Tom Daly.” He then got a slightly faraway look.

Barratt soon completed his hat-trick – his second in successive games – and then somewhat cavalierly went for a forth, seemingly oblivious to the jug implications. It later emerged that he has negotiated a deal with Garry Norton, proprietor of the Neptune Beer Emporium, St Helen’s Street, Chesterfield, for a job-lot of beer for his friends at the end of the season.

In the end, after the shaky mid period, The Bakewell Ten, as they will surely come to be known, ran out winners by 71 to 53, setting up a grand end-of-season finale at Southwell and the prospect of an exciting new campaign to come. In summarizing later, manager Bowyer said “Phew, that was a thriller! Our fitness was immense, and made all the difference. But it must be remembered that it was actually eleven tries to nine, so closer than you might think. George is to be congratulated for getting so many of his conversions – in a tighter game they’d have been crucial.” He went on “it was a much-changed team, again, so I’m hoping we’ll have more back next week and go out with a real bang.”