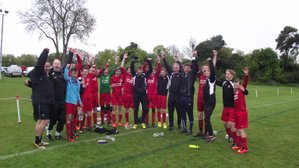 After what has seemed like weeks of waiting, the U14 Templars have finally been crowned champions of the Royston Crow League Division 1.

Following an impressive run of some 9 straight league wins, stretching back to the start of November, the title went right down to the last game of our season, away to the only team that could catch us; Letchworth GCE Whites. If we could get that 10th win, the title was ours.

In many ways it was a fitting end to a thrilling season, the two top teams battling it out with the winner taking all. It also proved to be one of the best games of football you’re ever likely to see with thrills, goals galore and two teams determined to win. With so much at stake it was also great to see football being played how we believe to be the right way and neither team resorting to underhand tactics.

The lads were fantastic, running out 4-3 winners, queue the celebrations.

Each and every one of the lads have played a vital part in the development and success of the team this season. Their attitude, desire, commitment and skill have been tremendous, leading to awesome performances on the pitch. Without a doubt we've been the best footballing side in the league, keeping all our fantastic supporters entertained even when the weather was more suited to staying at home.

I can honestly say I've looked forward to every Sunday and can’t wait to get going again next year.

Congratulations lads, you deserve all the plaudits you've got.